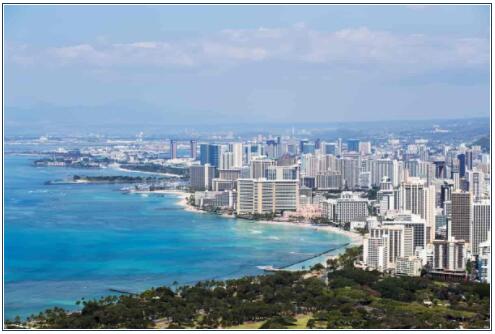 Hawaii is a state in the United States consisting of 132 volcanic islands in a 2450 km long chain of islands (formerly the Sandwich Islands) in the North Pacific; 16,760 km2, 1.37 million residents (2011). 99 percent of the area is made up of the eight main islands to the southeast, and the entire population lives here; most on Oahu (953,200) with the capital Honolulu. The many small islands in northwestern Hawaii are uninhabited; the military base Midway has special status. Hawaii became in 1959 the 50th state of the United States. Hawaii’s nickname is The Aloha State.

Due to a periodic influx of immigrants from North America and Asia in particular, the population is very ethnically composed. residents of mixed Hawaiian (Polynesian) descent make up a minority of approximately one-tenth, while Asians and whites make up, respectively. 42 percent and 27 percent. In 1950-1995, the population more than doubled, and growth remained high, especially due to a large birth surplus (birth rate 18.5 per mille, death rate 6.1 per mille). The average life expectancy of over 80 years is among the highest in the world.

With a staff of approximately 60,000, the military is a major employer and important economic factor. The largest military installations are on Oahu with the Pacific Fleet in Pearl Harbor and on Hawaii Island with the Pohakuloa Military Reserve. The island of Kahoolawe, which was involved in test explosions in 1941, was transferred to civilian purposes in 1994 after pressure from groups working for an independent Hawaii.

The importance of the military is surpassed only by that of tourism; it employs almost half of the population and has been the state’s main occupation since the breakthrough of charter flight in the 1960’s. Apart from Kahoolawe and the privately owned Niihau, the main islands are holiday destinations for 7 million tourists a year. Major attractions include Waikiki Beach, followed by Hawaii Volcanoes National Park in Hawaii and Haleakala National Park in Maui. In addition, the climate, nature and the many recreational opportunities seem alluring in themselves. For example, the islands have more than 1600 surf beaches and 60 golf courses. 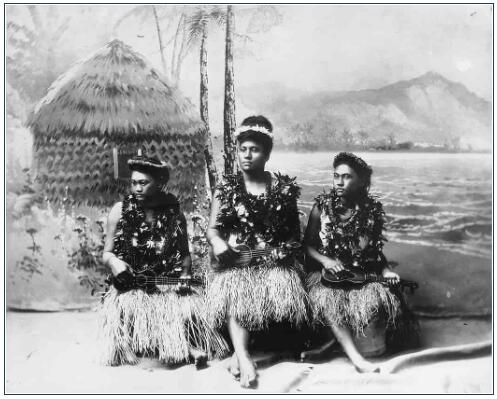 Agriculture benefits from the tropical climate and fertile, volcanic soils. Complemented by irrigation, you can grow almost anything: sugar cane, pineapple, cotton, rice, sisal, bananas, macadamia nuts, vegetables and flowers and fruits from all over the world. Leaving aside the illegal sale of marijuana (locally: pakalolo), sugar since the 19th century and pineapple since 1900 have historically been the main export crops, but in the late 1900’s. they had completely lost their significance. The entire agricultural sector is dominated by large agribusiness companies that own the majority of the agricultural area, incl. extensive grazing areas for cattle.

Forests are found especially on the northeast-facing mountain sides; Among other things, remains of the original rainforest with many thousands of endemic plant and animal species. Elsewhere, the natural plant growth consists of a semi-dry steppe vegetation. The variation is due to a different exposure to the prevailing trade winds, and the annual precipitation fluctuates from over 1100 cm on the windward side of the mountains to less than 40 cm on the leeward side. Apart from the high mountain areas (Mauna Kea 4205 m), the climate is predominantly tropical, and temperatures everywhere are fairly uniform with average temperatures of 22 °C in January and 26 °C in July. The coasts alternate between steep cliffs and wide sandy beaches and are in most places surrounded by coral reefs.

The archipelago consists of a number of volcanic islands, of which only the largest island, Hawaii, has active volcanoes; in 1790, however, there were also eruptions on the neighboring island of Maui. Hawaii consists of five large shield volcanoes formed by basaltic lava. Only Mauna Loa and Kilauea are active, while Hualalai most recently erupted in 1800-1801. Earthquakes are frequent, especially around Hawaii. The highest point is the extinct volcano Mauna Kea, whose total elevation above the ocean floor exceeds 9000 m.

Hawaii Island has been formed over the past 750,000 years by a large number of lava flows. In a northwesterly direction, the group’s islands are gradually getting older. Kauai is fx approximately 5 million years old. The volcanism of the Hawaiian archipelago is formed over a hot spot, i.e. over an area where convection current from the Earth’s mantle creates volcanism. Since the Pacific plate here moves approximately 10 cm pr. years in a northwesterly direction, previously formed volcanic islands move away from the hot spot area and thereby become inactive, while volcanism begins a new place. The series of volcanic islands continues in the Hawaiian ridge to the northwest. This ridge consists of underwater mountains (guyots, seamounts), which were formerly volcanic islands, but have since sunk below sea level. On some volcanoes in this submarine ridge, coral islands and atolls have developed in step with the subsidence. Kure Atoll, the last island in the series, has a volcanic core that is approximately 30 million years old. The strip of underwater volcanic mountains continues from here in a more northerly direction in the so-called Emperor Seamount Chain almost to Kamchatka. The oldest volcanoes from here are approximately 75-80 million years old. 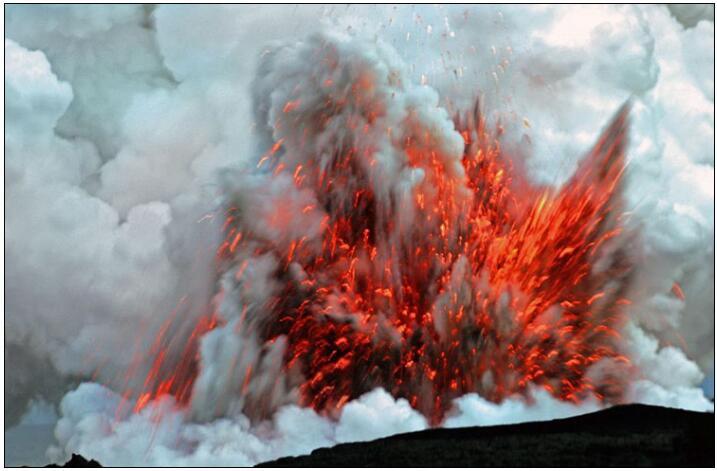 The continued plate movement has developed a new eruption site 30 km south of Hawaii and formed the submarine volcano Loihi, which is now 969 m below sea level.

Hawaii. Sailing birds are only found in Hawaii, where most species live in mountain rainforest. The 15 cm long iiwi, Vestiaria coccinea (top), seeks food in flowers on ohia trees, Metrosideros collina, from which it extracts nectar with its long, curved beak. Its orange-red feathers have been used for ritual robes and ornaments. The Maui parrot beak, Pseudonestor xanthophrys (bottom left), uses its strong beak to wring twigs and branches in its search for beetle larvae. Nukupuu, Hemignathus lucidus (bottom right), uses its straight lower beak as a chisel and its curved upper beak as a needle to prick insects out with.

The composition of the archipelago’s wildlife is a school example of oceanic islands that have never been connected to the mainland. The isolation means that there are no native species of freshwater fish, amphibians, reptiles and mammals (except for a single bat species). At the same time, many species are endemic, e.g. the 30 species of seal birds, a group of finches, are known only from Hawaii (eight are extinct in recent times). Endemic species swarms are also common among land snails and insects; Hawaii, for example, houses over 600 endemic species of banana flies, many of which have a very different way of life than banana flies from the rest of the world.

The indigenous people, kanaka maoli ‘the true people’, immigrated from central Polynesia to Hawaii from the 1st century possibly. They developed a hierarchical social system that is closely linked to a religious understanding of man as related to the environment and all living things. Many still believe that land cannot be owned, but must be nurtured, loved and respected as an older relative. The chiefs, who were linked to the gods, had mana, divine power, which had to be protected by kapu, the Hawaiian form of taboo. Agriculture, gathering and fishing were the main sources of nutrition and are still an important part of the indigenous population’s economy. 20 percent of Hawaii’s population is Kanaka Maoli and is the lowest social group in Hawaii by Western standards.

According to a government office calculation, by 2044 there will be no more “pure” kanaka maoli left. However, this is counteracted by a strong cultural awareness and local research, which has resulted in a political movement to win, among other things. land, cultural rights and self-government.

In Hawaii, predominantly English is spoken, but also Hawaiian, Pidgin English as well as various immigrant languages, especially the Filipino languages Ilokano and Tagalog. Japanese and Spanish are the first foreign languages ​​in the school. The original Hawaiian language, which is a Polynesian language in the Austronesian language family, is only spoken by quite a few, but has been an official language alongside English since 1992. Hawaiian is typically Polynesian with only eight consonants and five vowels.

Hawaii’s indigenous people are believed to have immigrated from Polynesia in several waves during the first millennium possibly In 1778, James Cook came as the first European to the islands; he named them the Sandwich Islands after the then British Secretary of the Navy, John Montagu, Earl of Sandwich (1718-1792).

Around 1795 all but two islands were united into one kingdom under Kamehameha 1. (1758-1819); the last two islands were incorporated after negotiations in 1810. Kamehameha’s successor abolished the traditional taboo religion, but an actual missionary activity did not begin until the 1820’s. A large part of the original population was then dead from a number of diseases that European and American whalers had brought with them. In 1851, Kamehameha III (1814-1854) placed the islands under U.S. protection, in 1887 the United States gained access to Pearl Harbor, and from 1908 the port was expanded as a base for the Pacific Fleet.

Growing American interests in sugar plantations using labor imported from China and Japan and the islands’ dependence on the US market led to the sale of Queen Liliuokalani (1838-1917) in 1893. However, US President Grover Cleveland rejected the coup plotters’ request to annex the islands. Instead, the Republic of Hawaii was established in 1894 with the American Sanford B. Dole (1844-1926) as president.

With the United States’ acquisition of the Philippines in 1898, the annexation plans were taken up again; In 1900, Hawaii gained American territory status. After World War I, Americanization gained momentum.

The Japanese attack on Pearl Harbor on December 7, 1941 became the immediate cause of the United States’ entry into World War II, and Hawaii was given a very central role in the war in the Pacific. After several proposals both before and after the war, Hawaii was admitted as a state in the United States in 1959 at the same time as Alaska.