A large majority of Paraguayans are Catholics. The majority of other residents belong to Protestant communities, including the Mennonite Church.

Freedom of religion is guaranteed by the Constitution. The Catholic Church has great influence in society. During the Stroessner dictatorship (1954–1989), the church was the only independent institution that was not banned, despite its harsh regime criticism and active support for the opposition. Progressive priests support farmers’ demands for land reform, and various communities often cooperate in the fight against poverty.

Catholic missionaries in the 17th and 18th centuries converted most of their residents. Nowadays, the original Native American religions are almost forgotten, even though elements of traditional faith remain and have been incorporated into Catholicism. In a 2002 census, nearly 90 percent of residents identified as Catholics.

Among non-Catholics, the vast majority were Protestants or members of any other Christian community. The proportion of Protestants is believed to increase as especially evangelical groups carry out active missions in the country. The Mennonites are so-called Anabaptists, who believe in adult baptism and are strongly pacifist (see also Population and Languages).

In Paraguay there are also small groups of Buddhists, Jews and Muslims, among others. 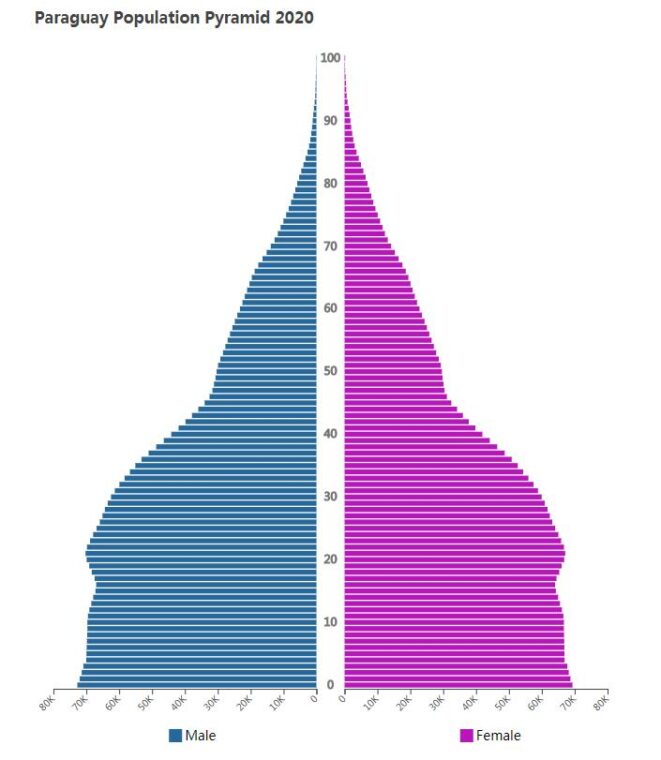 Concern about infection from Brazil

The borders are closed because of the corona

President Mario Abdo Benitez closes the country’s borders for entry since Paraguay’s second death in covid-19 was recorded. Exceptions are made for citizens and persons with residence permits, but they must be quarantined in military posts. No passenger flights are allowed.

Paraguay and Brazil formally tear up an energy agreement that was signed in May but became public only last week. The Paraguayan government has previously informed Brazil that the agreement cannot be implemented since it triggered a serious political crisis (see July 29). Negotiations on the distribution of electricity from the power plant on the border between the countries will now be resumed. President Abdo, in a statement, thanks those who supported him, including Brazil’s President Jair Bolsonaro, a close ally.

Foreign Minister Luis Alberto Castiglioni resigns, as does the ambassador to Brazil and the Paraguayan head of the Itaipú power plant, as a result of a criticized energy agreement with Brazil. All three people have been appointed by President Mario Abdo Benítez who has been in blustery weather since the agreement became known on July 24, when the head of state electricity company Ande resigned in protest of the agreement. The deal that regulates Paraguay’s share of the electricity produced in Itaipú until 2023 would, according to critics, cost Paraguay $ 200 million. The opposition, led by the center party PLRA, has requested a declaration of the agreement which is considered unfavorable to Paraguay, and threatened to try to put the president before the national court.

Paraguay and the other Mercosur countries reach a free trade agreement with the EU after 20 years of negotiations. However, in order to enter into force, the agreement must be approved by the European Parliament and all individual EU states, which can prove difficult due to increasing protectionism and opposition to free trade. The agreement is the second largest EU agreement, covering 780 million people and a quarter of the world’s GDP. Both environmental organizations and farmers in the EU are critical to the agreement.

A new regional forum is formed

President Mario Abdo Benítez and seven other South American presidents, during a meeting in Chile, launch the new Regional Forum for the Progress of South America (Prosur) which is intended to replace Unasur – a regional body that has effectively ceased to function. Prosecur will mainly support democracy and the market economy, it says. The initiative has been taken by the presidents of Chile and Colombia, and the other participating countries are Argentina, Brazil, Ecuador, Guyana and Peru. Representatives of the left-wing governments in Bolivia, Surinam and Uruguay attend the meeting, but those countries do not join Prosur. Venezuela was not invited.