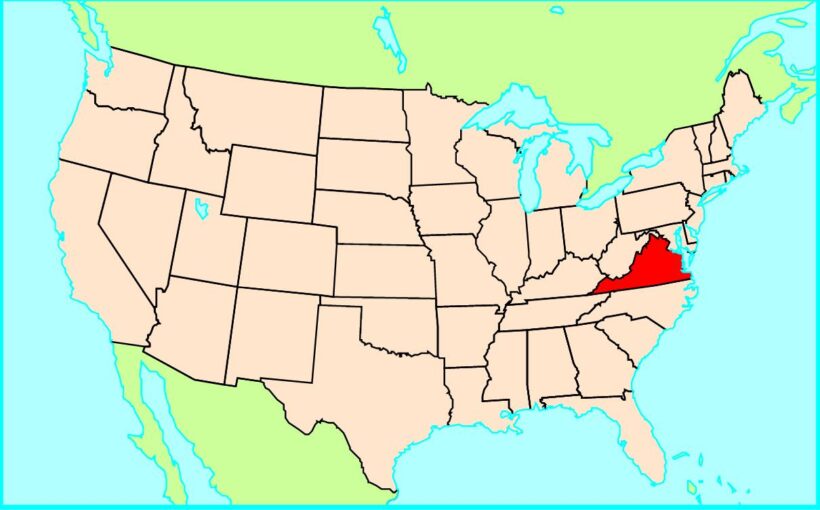 Virginia, (after the English Queen Elizabeth I, known as the Virgin Queen), Atlantic State in the United States at Chesapeake Bay; 105,586 km2, 8.1 million residents (2011). Capital: Richmond (204,000). Joined the Constitution in 1788 as the tenth state with the nickname: “The Old Dominion State”.

The population has been growing strongly since the 1960’s, especially concentrated around the federal capital Washington, DC, where the former rural suburbs such as Arlington, Alexandria and Fairfax have been transformed into densely populated residential and office areas, mixed with branches of General Dynamics, Mobil and other large companies. Another population center of gravity is the Norfolk-Virginia Beach-Newport News metropolitan area, which encloses the Hampton Roads harbor area in the SE. The rest are distributed among a declining rural population (30%) and medium-sized cities such as Richmond, Roanoke, Lynchburg and Charlottesville. The proportion of blacks (19%) has more than halved since the 1800’s. 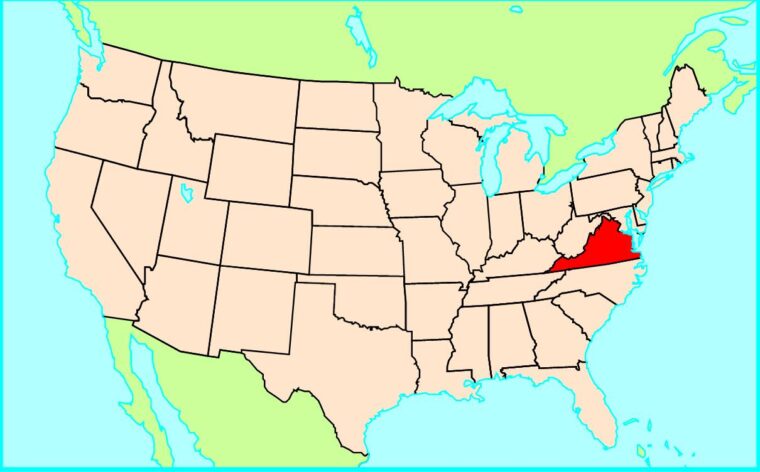 Virginia has a large public sector that includes the Federal Pentagon and the naval base in Norfolk with a staff of approximately 100,000. Much of U.S. foreign trade takes place via Hampton Roads, which is also home to shipyards and the chemical industry. Other important industries are the textile and food industry as well as the Philip Morris- dominated tobacco industry in Richmond. The main crops are soybeans, maize, tobacco and peanuts, which together with orchards and pastures (cattle) occupy 24% of the area, spread over 47,000 holdings (1994). Arable land has long had to give way to road construction and suburban development (especially the tobacco area has declined sharply), while the forest area, which now accounts for 61%, has increased since the 1930’s.

The landscape consists of a wide coastal plain intersected by rivers flowing into the Chesapeake Bay, which continues through a hilly transition zone (Piedmont) into western Virginia’s scenic Blue Ridge Mountains. The excursion destinations include the Shenandoah National Park, the Luray Caverns limestone caves, Mount Rogers (1746 m) and in winter several ski resorts. The biggest tourist attraction is the theme park (Colonial) Williamsburg (1934), which together with Jamestown and Yorktown forms the Historic Triangle on the peninsula off Richmond. Other attractions include famous residences and country houses for some of the eight U.S. presidents who came from Virginia, such as Mount Vernon (George Washington) and Monticello (Thomas Jefferson).). The climate is rainy (800-1200 mm) and almost subtropical except for the mountain areas. 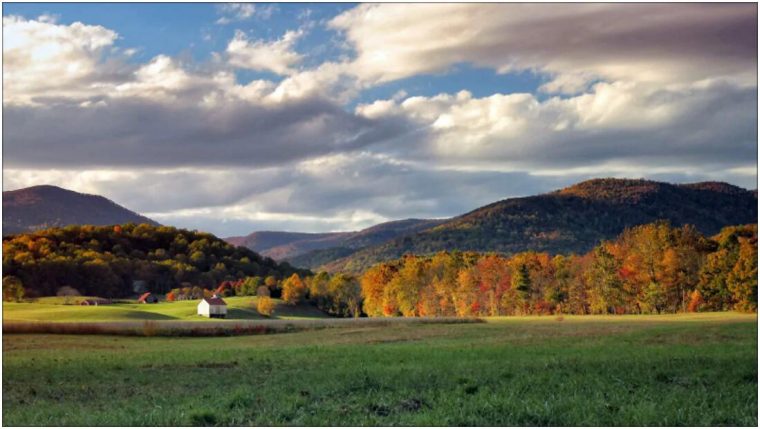 Virginia was the first permanent English colony in North America, established in 1607 in Jamestown and founded by the Virginia Company of London. The colonists established themselves with the support of the Powhatan Indians, but also by fighting them, and a basis for the colony’s economy was created with tobacco cultivation, using contract workers imported from Africa; the actual slavery was first introduced approximately 1680. In 1624 the Virginia Company went bankrupt and the area was given the status of a royal colony with some local self-government in the House of Burgesses., the first elected representative assembly in North America. Originally, Virginia had been annexed to all areas to the west, but after the peace treaty of 1763, the British Parliament banned further expansion, and Virginia became an important hotbed of an American separatist movement; several of the leading figures of the American Revolution and the leading politicians of the young United States, such as Thomas Jefferson, George Washington, and James Madison, thus belonged to the Tidewater Aristocracy, the elite of landowners in Eastern Virginia whose ideas of self-government and democracy came to shape it. U.S. Constitution. Virginia was also the scene of much of the fighting during the War of Independence, including the decisive American victory at Yorktown in 1781. Virginia was the most populous of the 13 original states of the United States and was first approximately 1820 surpassed by New York; as early as 1778, the importation of slaves from Africa was banned in Virginia, but as an institution slavery continued, and slaves until 1850 amounted to approximately 40% of the population. Along with the other slave states in the South, Virginia joined the Confederate States of America in 1861. A number of the most important battles during the American Civil War 1861-65 were fought in Virginia. Civil War led also to a split of the state, since the 15 Western counties by more than 1/3 of the state space and about 1/4 of the population, of which 5% were slaves, in 1861 formed its own government, declaring itself loyal to the Union, and in 1863 proclaimed the state of West Virginia.

When Virginia was resumed in the United States after the Civil War, the state had lost its central political and economic importance. Late 1800’s. racial segregation, segregation, were introduced and shaped the state until the 1960’s.