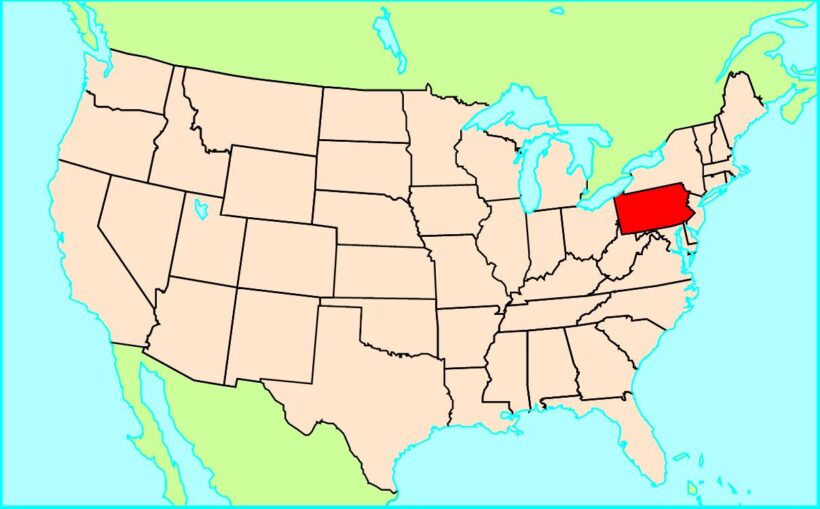 After a large European immigration in the 1800’s. and the beginning of the 1900-t. Pennsylvania has had only modest population growth. Nearly half of the population lives in the major cities of Philadelphia and Pittsburgh, while a third belongs to the rural population, which has a marked imprint of the Amish and other religious communities. The black minority is predominantly found in Philadelphia.

Until the 1960’s, Pennsylvania was one of the largest producers of coal and steel in the United States. Since then, the decline of the iron and steel industry has affected cities such as Pittsburgh, Johnstown, Allentown, Bethlehem and Scranton. However, the mining of anthracite coal in particular is still large, and after a partial restructuring of the industry, Pennsylvania has become a leading producer of pharmaceuticals, electronics, special steels and aerospace.-equipment. Also important is the food industry, which is supplied with products from approximately 56,000 farms. Farming is versatile and includes dairy cattle, pigs and poultry in addition to soy, maize and horticultural products (mushrooms, vegetables, fruit). The cultivated lands occupy 22% of the area, while deciduous forest covers 56%. The forests form the basis of the wood and paper industry and are also popular hunting areas. 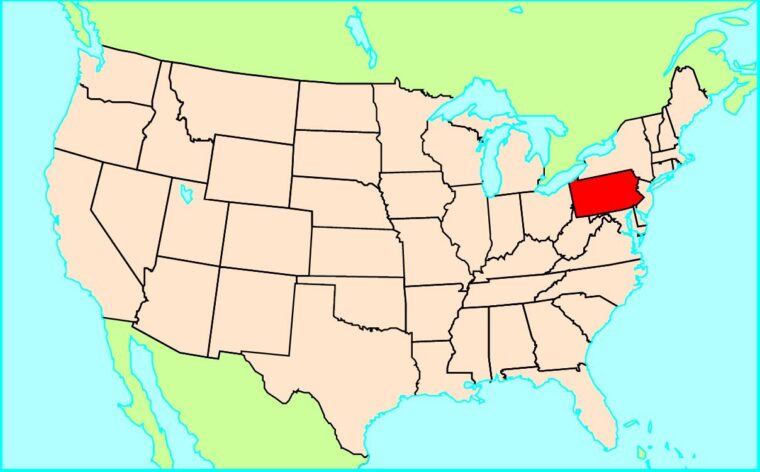 The landscape, which is rich in rivers and lakes, consists mainly of an approximately 500 m high mountain terrain, Appalachian Plateau, which is replaced by fertile coastal plains at resp. Lake Erie in the NW and around Philadelphia in the SE. The three major river systems – Susquehanna, Ohio and Delaware – are all regulated and utilized for hydropower and navigation (especially the Ohio River). The climate is rainy and temperate with warm summers in the central and southern parts and cold winters with heavy snowfall to the north.

The tourist destinations include several historical parks and monuments and the scenic Pocono Mountains in the NE (in winter skiing). Attractions include Gettysburg National Military Park (near Philadelphia), Hershey Chocolate World (near Harrisburg) and the Harley-Davidson Museum and Collection Factory in York.

The first European settlement was Swedish (Tinicum Island south of Philadelphia, 1643), but it was conquered by the Dutch in 1655 and then by England in 1664. The name Pennsylvania comes from the colony established in 1681 under the leadership of the Quaker William Penn, whose rule was marked by notions of equality and tolerance, including in the relationship with the Indians Da colony in the 1700’s began to expand into the country, however, it came to conflicts between the pacifist Quaker regime, the pioneers and the Indians. The Indians were also allied with Britain, and Pennsylvania was largely the North American scene during the Franco-Indian War of 1754-63. Both militarily and politically, the area and especially the city of Philadelphia were of central importance during The American Revolution 1775-83. The Declaration of Independence, and later the current Constitution of 1789, was drafted in Philadelphia, which was the capital of the United States 1790-1800; contradictions within the state, however, led to local revolts in 1794 and 1799. Throughout the 1800-t. Pennsylvania was the target of extensive immigration, not least from Germany, and in terms of population and business, the state became one of the United States’ leaders. Also during the American Civil War of 1861-65, several important battles were fought in Pennsylvania (see Gettysburg), just as some of the most important labor disputes unfolded here; the lockout at the Carnegie plant in Homestead in 1892 thus contributed to the effective organization of the steelworks only taking place in the 1930’s. 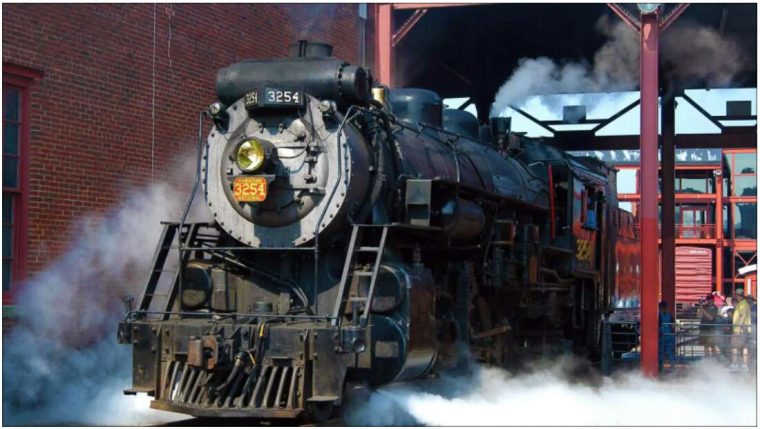 The North Country National Scenic Trail crosses a vast area of seven North American states and leads past historical, cultural, natural and scenic attractions. It was built through the efforts of many people, and once completed, it will be the longest continuous hiking trail in the United States of America. Thanks to the route, you can walk through many different landscapes of the states of North Dakota, Minnesota, Wisconsin, Michigan, Ohio, Pennsylvania up to New York.

The trail is mainly taken care of by volunteers, who try to constantly extend it and keep it in good condition. Thus, new and additional sections are constantly being developed, the existing accessibility is improving, which of course also attracts more and more visitors.

In Michigan, the route begins near the village of Ironwood and then enters the Ottawa National Forest. It continues along the Black River Canyon, through the Porcupine Mountains Wilderness State Park. It crosses numerous historical sites associated with copper mining near Old Victoria before finally bringing hikers to the Sturgeon River Gorge Wilderness area.

On your Michigan road trip, you can check out Craig Lake State Park, Presque Isle City Park, and Laughing Whitefish Falls, home to the tallest waterfall in the country. In a certain section, the trail skirts the Upper Lake, which is one of the biggest tourist attractions on the entire route. The landscape around the Great Lakes is densely forested, gently rolling, and visitors will find themselves in one of the most remote and least populated areas on the route.

The trail then follows the shores of Lake Michigan, crossing many interesting and inviting spots and joining the Manistee River Trail, which provides great tramping opportunities. The last place the trail crosses before entering the state of Ohio is the Lost Nation State Game Area near Pittsford.