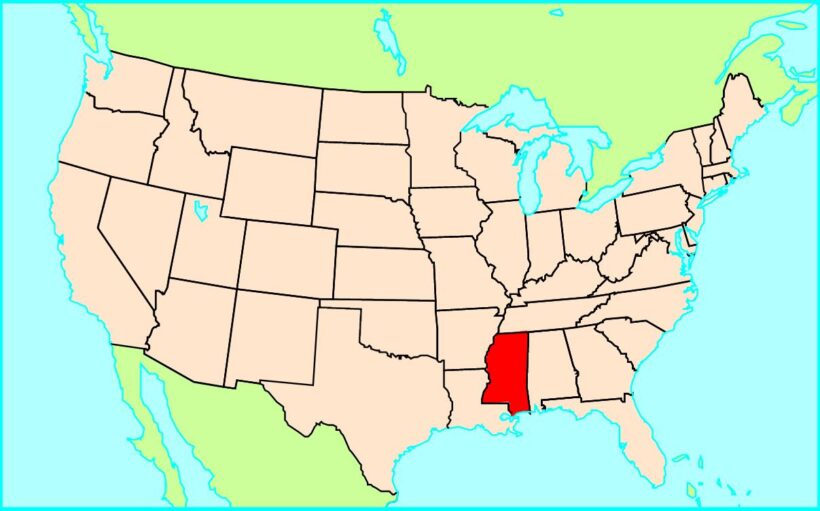 Mississippi is one of the most backward states in the United States in terms of income and standard of living. A quarter of the population lives below the official poverty line, and both child mortality and illiteracy are, albeit declining, higher than in other states. Poverty is most prevalent among the blacks, who after great emigration to northern industrial cities such as St. Louis and Chicago make up 35% of the population. Just over half of the residents belong to the rural population, while the rest live in small and medium-sized towns. The second largest urban area is Biloxi-Gulfport-Pascagoula on the Gulf of Mexico.

From the 1800’s. and until World War II, the economy was mainly based on cotton. Since then, production has become more versatile, while agriculture has lost ground both economically and in terms of employment. However, it is still of great importance, as a supplier of raw materials to the textile and food industry. The main products are chickens and beef cattle, cotton, soy, rice and corn. The number of holdings has decreased, but the agricultural area remains unchanged at one third of the state’s area. The rest is mainly taken up by deciduous and pine forests, which forms the basis of the paper and furniture industry. In addition, there is the chemical industry, oil and natural gas, the fishing industry and a rapidly growing electronics industry in Jackson. 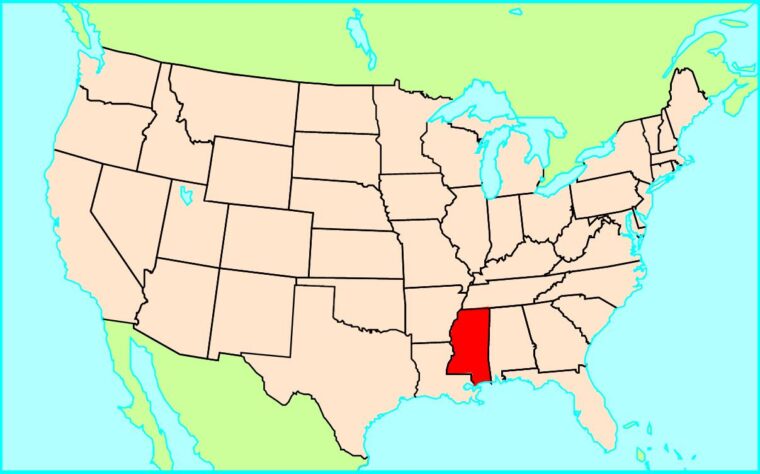 Attractions include the Vicksburg National Military Park and other historic theme parks. Blues lovers visit cities such as Greenville and Clarksdale, which are considered meccas for the original delta blues.

The landscape consists mainly of a low-lying, fertile coastal plain that is flowed by rivers, many of which are tributaries to the Mississippi to the west. Along the coast are sandy beaches and species-rich bird habitats. The climate is rainy and mostly temperate with average temperatures of 8-10 °C in Jan. and 26-28 °C in July.

Mississippi, like the neighboring state of Louisiana, was hit hard by Hurricane Katrina on August 29, 2005. Particularly extensive was the damage to the coastline from Biloxi to Gulfport, where a tidal wave destroyed about 90% of the buildings and 126 people lost their lives.

Spanish explorers under the Soto explored around 1540 the area, which was inhabited by Choctaw and Chickasaw Indians; from approximately In 1670, the French invaded from the north. France claimed the entire Mississippi Valley in 1682, and from 1699 Biloxi was the first permanent settlement. With the exception of New Orleans, in 1763 the French possessions were ceded to the British, who in 1783 handed them over to the United States; a Spanish-occupied territory first came under the United States upon the creation of the Mississippi Territory in 1798. After several boundary changes, the western part was incorporated in 1817 as a state in the United States; two years later, the eastern part was incorporated as the state of Alabama. With the establishment of slave-based cotton plantations in the 1820’s, the Indians were displaced, and as one of the most prominent slave states, the Mississippi stepped out of the United States in 1861 and was joined by the Confederate States of America during the American Civil War 1861-65; In 1870, the state was re-established in the Union. The following hundred years were marked by racial segregation, which was enshrined in the state constitution in 1890, and until the 1960’s, the Mississippi was the epitome of “The Deep South.”