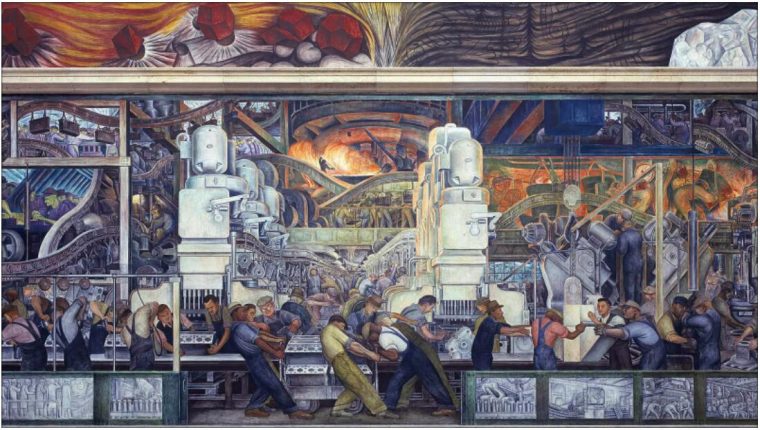 The state consists of two peninsulas, the Upper and Lower Peninsula, which since 1957 have been connected by a bridge over the Strait of Mackinac between Lake Michigan and Lake Huron. The majority of the population lives in the cities in the southeastern part of the Lower Peninsula with the city of Detroit – Ann Arbor – Flint (a total of 5.3 million residents). The cities form a unified industrial region, which starting in the 1800’s. especially gained importance after the founding of Ford Motor Co. (1903), General Motors (1908) and Chrysler (1924). The three groups, The Big Three, has since, along with countless subcontractors, had a major impact on the state’s economy, just as ups and downs in the automotive industry have affected employment and migration flows. The last great wave of immigration, which consisted mainly of blacks from the Southern States, arrived during and after World War II, while the car crisis of the decade from the late 1970’s created high unemployment and major social problems. Regardless of factory closures, however, Michigan is still the USA’s largest car manufacturer and among the leaders in, among other things. machinery, textiles, furniture, plastics, rubber, food and chemical products. 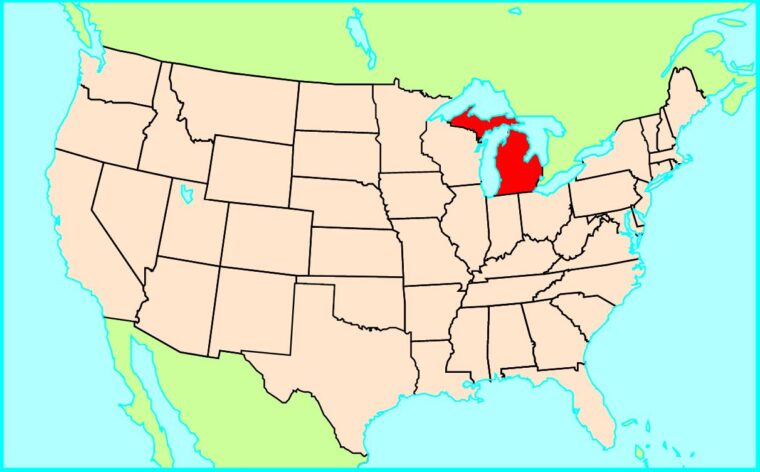 Forests cover just under half the area, and the Upper Peninsula in particular has a large forestry, while most farms are found on the former grasslands near the borders of Indiana and Ohio to the south.

Apart from the western part of the Upper Peninsula with Mount Arvon (604 m) is the landscape predominantly a small hilly lowland with moraine deposits from the last ice age. The climate is temperate and rainy, but due to the Great Lakes it is less continental than the neighboring states. Well-known tourist destinations are the Isle Royale in Lake Superior and the coastal dunes Sleeping Bear Dunes on Lake Michigan.

Michigan was originally inhabited by various, predominantly Algonquian Indian tribes. French fur traders and missionaries penetrated in the 1600’s. into the area and laid out Sault Sainte Marie in 1668 and Detroit in 1701. In 1763 the area was ceded to Great Britain, and the British evacuated it only in 1796, although at the Peace of Paris in 1783 it fell to the United States and from 1787 formally part of the Northwest Territory. In 1805, Michigan was separated as an independent territory, but it was not until after the American-English War 1812-14 and especially after the opening of the Erie Canal in 1825 that the American influx took off. After the separation of Wisconsin territory, Michigan with the peninsula north of Lake Michigan in 1837 was incorporated as a state in the United States; the peninsula’s deposits of iron and copper ore laid the foundation for industrial development in the second half of the 1800’s, where there was immigration from especially Poland and Italy, but also from Holland, Germany and Ireland.