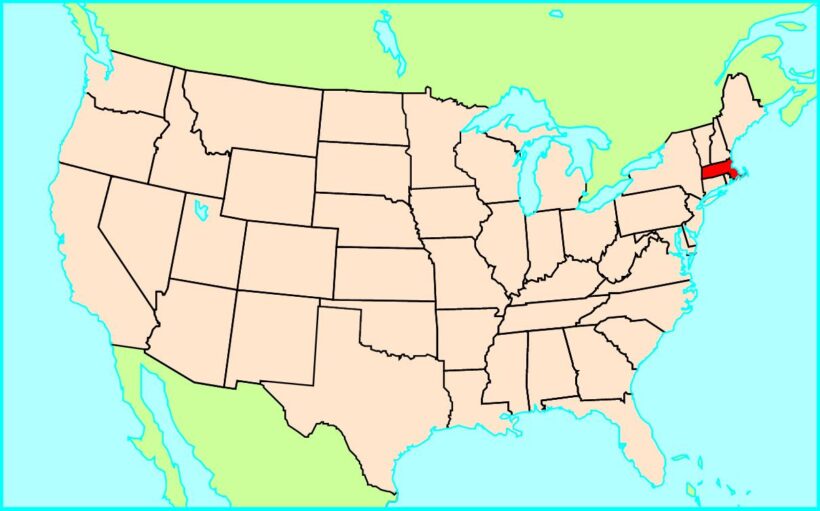 Massachusetts, off. the Commonwealth of Massachusetts, state on the Atlantic coast of New England, USA; 21,386 km2, 6.5 million population (2010), of which 80% are white. Capital: Boston. Joined the Constitution in 1788 as the 6th State; nickname: The Bay State.

Massachusetts is one of the smallest, most prosperous and with 254 residents per km2 most densely populated states in the United States. 85% of the population lives in cities, of which 3.2 million alone. in the Boston metropolitan area. The rest are distributed in Springfield, Worcester, New Bedford and other medium-sized towns in addition to numerous small towns on the coasts of the Atlantic coast. Less than 10% of the area is occupied by agriculture, horticulture and orchards, while 50% is forest, especially in the Appalachians to the west. Both agriculture and forestry are of modest economic importance; this also applies to fisheries, which, despite the United States’ second-largest catch (after Alaska; especially shellfish, cod and haddock), are subordinate to industry and trade, as well as banking and finance. The traditional industries with roots dating back to the 1800’s. (textiles, shoes, firearms) has been replaced since the 1960’s by high-tech companies, which from the beginning made the Boston area one of the country’s leading high-tech centers. This was done partly through large military grants, partly through collaboration with leading laboratories and research environments at Harvard University, Boston University and the Massachusetts Institute of Technology.(MY). Growth was greatest during the “economic miracle” of the 1980’s, but has since been reduced under the impression of declining military budgets and corporate relocations.

Massachusetts, however, is still New England’s most important industrial state and by virtue of Logan International Airport and the container port of Boston are among the country’s ten largest exporters. In addition, a lucrative tourism based on equal parts historical, cultural and recreational attractions; Among other things, Minuteman National Historic Park, Plymouth Plantation, Springfield Armory, Cape Cod Peninsula and the former whaling islands of Nantucket Island and Martha’s Vineyard. In winter, there is skiing in the mountains to the west, the Berkshire Hills and the Taconic Mountains with the state’s highest point, Mount Greylock (1064 m). The climate is rainy and temperate with average values ​​around −1 °C in January and 21 °C in July.

European exploration of the area took place from the beginning of the 1600’s, but crucial were the English Puritans, who arrived with the ship Mayflower in 1620 and founded the Plymouth Colony. The influx of Puritans was large, and in 1630 the Massachusetts Bay Colony was established, which was granted royal privilege and under the leadership of John Winthrop expanded to the north. By merging the two colonies in 1691, the privilege was extended to include all of Massachusetts, including what was separated in 1820 as the state of Maine. Relations between the colonizers and the Indians were generally peaceful until King Philip’s War of 1675-76; in the 1700’s. there were repeated clashes with the Indians and their French allies. Given a wide range of contradictions with Britain, events in Massachusetts were like The Boston Tea Party and the clashes at Lexington and Concord helped trigger the American Revolution of 1775-83. The state became in 1800-t. leading in the early industrialization of the United States, and it was characterized by a very large immigration, not least from Ireland.

Quinebaug & Shetucked RVNHC is an interesting and unconventional type of park. It includes a large number of cities, villages, and the total population in its area reaches approximately 300 thousand people. We can find here, for example, non-profit cultural organizations, numerous shops, organizations dealing with the protection of the natural environment, local and state government organizations. The National Park Service works to not only protect this region, but also promote its cultural, natural, and historical heritage.

Great blue herons live in this protected corridor, which have become a kind of symbol and are among the largest local birds. Birds are very shy and wary of people, yet they become the main object of observation for enthusiastic ornithologists. These birds are solitary and like to build their nests in trees that are inaccessible to other animals and, of course, to humans. Wetlands are most suitable for them. The best chance to observe these birds is when they are feeding, both in the early evening and during the day. You can also usually see them during their migration, at the beginning of spring.

Bird watching is a great way to get to know the Quinebaug and Shetucket Rivers Valley National Heritage Corridor and its inhabitants. The nature reserve covers an area of 695,000 acres from northeastern Connecticut to south central Massachusetts.