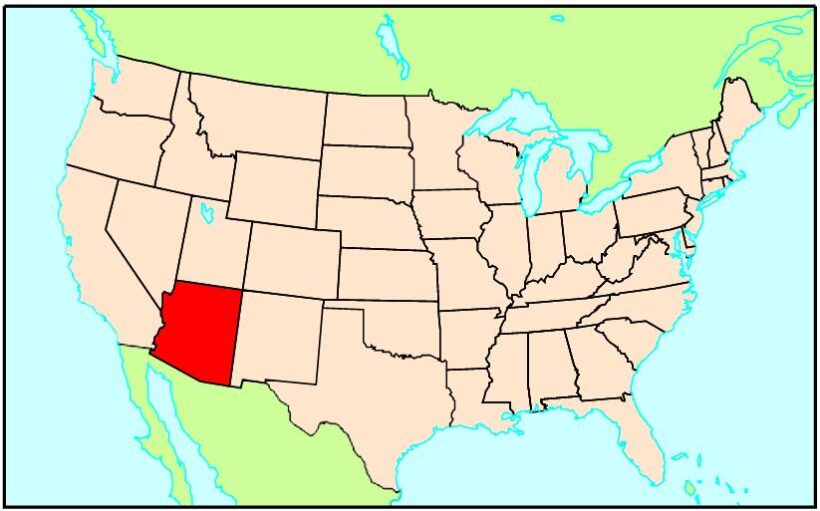 Arizona has been one of the fastest growing states in the United States since the 1940’s. Over half of the population lives in the Valley of the Sun growth region, which includes Phoenix and the neighboring towns of Mesa, Glendale, Tempe and Scottsdale. The rest are spread over 20 Native American reservations, a few smaller towns and Tucson (508,000 residents) to the south. The reserves, with the Hopi and Navajo reserves in the NE being the most populous, belong to the federal state, which owns 44% of Arizona’s land. 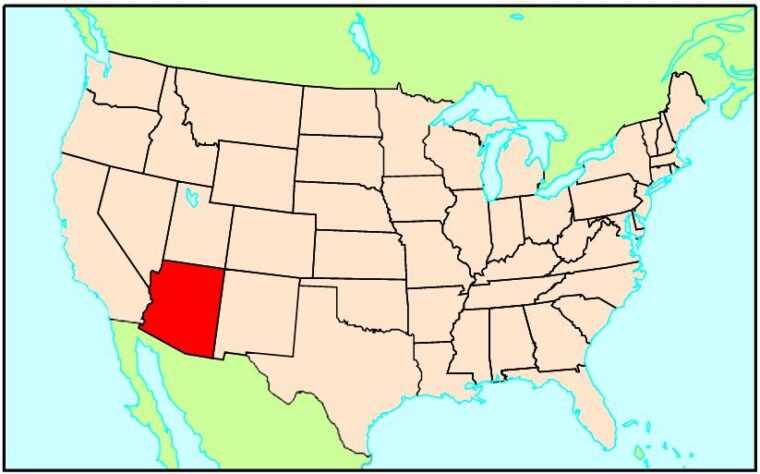 Apart from river valleys and low sections in the central and southwestern part, the landscape consists of high plateaus, which in the north are intersected by many canyons, the magnificent Grand Canyon. The surface is characterized by flat-topped mountains, mesas, and other erosion- created landscape forms, which are broken in places by ancient volcanoes, such as Humphreys Peak (3853 m). The climate changes with altitude, but is generally low in precipitation, hot and sunny. The annual precipitation rarely exceeds 200-250 mm, which is evident in the vegetation, which mainly consists of shrub steppe and a few deserts, e.g. the Gila and Sonora deserts with the famous giant cactus, saguaro. The forested mountains north of Phoenix and in southern Arizona receive more rainfall and are used for skiing in the winter. The shrub steppe is used in many places for extensive cattle breeding (sheep farming in the Navajo reserve), while agriculture is dependent on irrigation and limited to areas by e.g. Salt River near Phoenix and Gila River near Yuma in the SW. The main crops are cotton (45% of the cultivated area) as well as citrus fruits, vegetables and alfalfa. Irrigation farms utilize 80-90% of the scarce water resources, which has especially caused problems in relation to the urban population. Much of the water is supplied by the Colorado River (by agreement with California), while the rest comes from boreholes and dam Theodor Roosevelt Lake on the Salt River. Other and even larger artificial lakes, Lake Mead at Hoover Damand Lake Powell at Glen Canyon Dam, serving recreational purposes in addition to river regulation and hydropower. 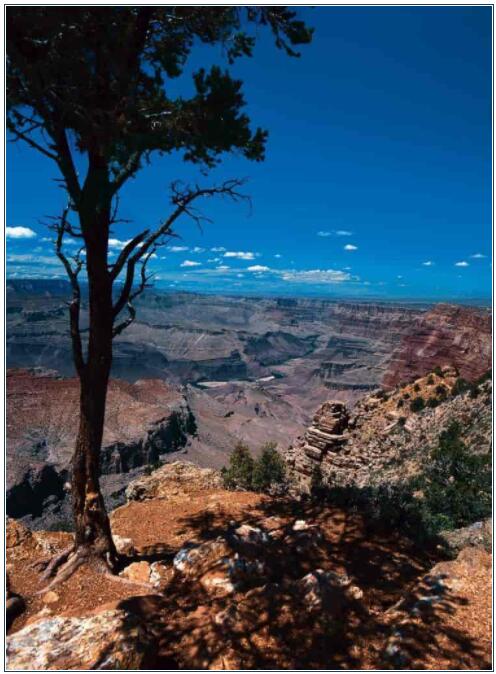 Arizona. The unique Grand Canyon is a UNESCO World Heritage Site. A deep and steep valley gorge shaped by the Colorado River can be followed 350 km and is in places 1800 m deep.

Arizona is rich in minerals and has a large production of copper, molybdenum, silver and uranium. However, the value is modest compared to the industry, which has grown strongly since 1940, when military orders set in motion a significant aircraft industry. Later, IBM, Western Electric and other high-tech companies set up branches in the state and contributed to the large-scale immigration. The same goes for tourism, which has become one of Arizona’s most important sources of revenue. Attractions include the world-famous observatories Lowell and Kitt Peak as well as the Grand Canyon, Monument Valley, Saguaro Monument and the petrified forests of the Petrified Forest. In northeastern Arizona, Meteor Crater (Barringer Crater) is witnessing) with a diameter of 1.2 km about a disaster in the distant past. Since its inauguration in 1991, many tourists have also flocked to the experimental Biosphere 2 ecosystem just north of Tucson.

Archaeological finds testify to settlement for more than 25,000 years, but are particularly important for the period 500 BC. to 1300-t. with the characteristic urban formations pueblos. In the 1500’s. visited the area by Spaniards in search of gold, but not until the 1700’s. relocation and missionary activity took off, after large silver finds at Nogales in 1736. After the Mexican-American War (1848), Arizona was ceded to the United States, however, the southernmost area was not acquired until 1853 (see Gadsden purchase). The fight against the Apache Indians officially ended in 1877 (see Geronimo), and at the same time large copper deposits were discovered in the southern part. The actual American settlement did not take place until after the construction of railroads through Arizona in 1883.