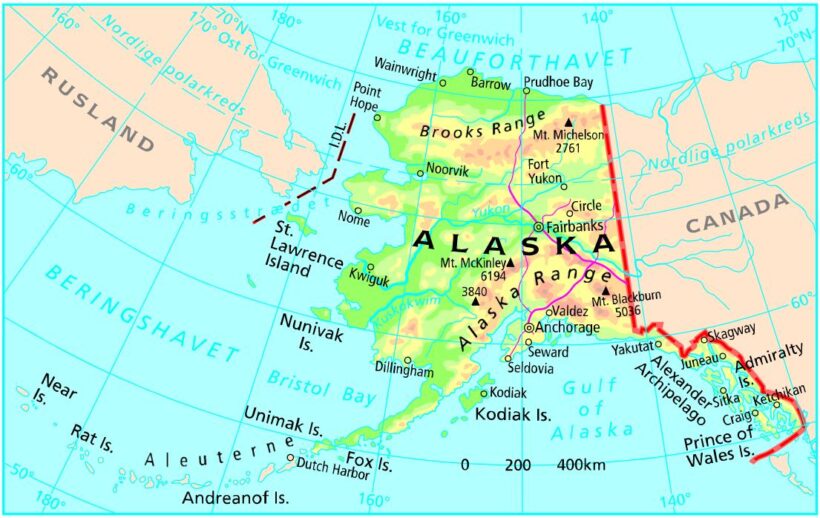 Alaska is the largest and most sparsely populated state in the United States with 0.36 residents per capita. km2. The majority of the population lives in the cities in the temperate coastal areas of the Gulf of Alaska and near the southern border of Canada, the Alaska Panhandle. With the exception of Anchorage and Juneau, the cities are dominated by fishing; the total catches are the largest in the United States and include salmon, cod (Alaskan Pollack), herring, halibut and crabs.

The southern coastal areas are bounded on the mainland by volcanic mountain ranges with North America’s largest glaciers and highest mountains, Alaska Range. The only major city north of this is Fairbanks on the Alaska Highway, built as a military supply route in 1942. The rest of the wooded interior as well as the tundra areas of the western and northern coastal region are, with few exceptions, deserted and can only be reached by plane.

In addition to fish and marine mammals, the state is rich in wood (about a quarter is forested), minerals (gold, iron, zinc) and fossil energy (coal, oil, natural gas). Only a small part of the resources are utilized on a larger scale due to high production costs (climate, terrain, distances) and restrictive legislation to protect nature and the indigenous people of the polar tundra areas. Almost half of the 920.000 km2, owned by the federal government, was in 1980 subject to the provisions Alaska Lands Bill, which exclude or limit commercial exploitation. As part of US energy policy, the federal government decided in 2001 to open up oil production in the Arctic National Wildlife Refuge., located in the northeastern part of the state. The decision was criticized by environmental organizations and by neighboring Canada, but has the backing of Alaska’s residents. 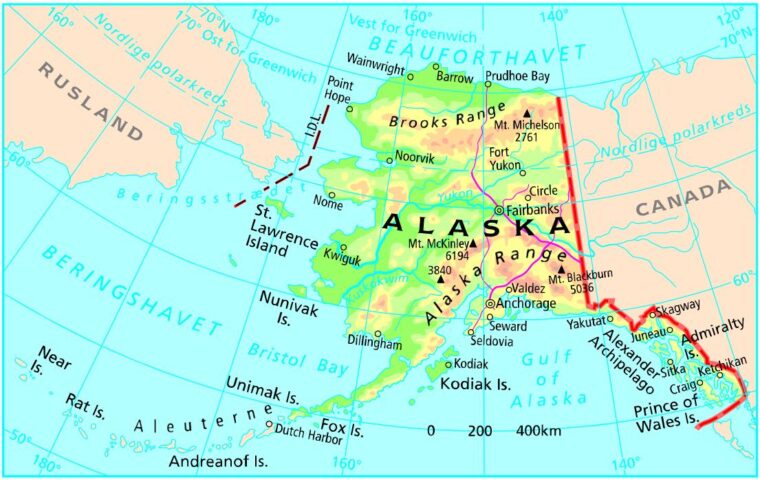 Oil has the greatest economic significance. Just a few years after the opening of the Trans-Alaska Pipeline (1977) from the fields at Prudhoe Bay to the port of Valdez, the state was the second largest oil producer in the United States (after Texas). Since 1982, revenues from oil production at Prudhoe Bay and Kubaruk have contributed approximately 2000 dollars pr. resident in the so-called Alaska Permanent Fund. In addition, large revenues come from military bases, the wood industry and tourism (Denali, Katmai, Glacier Bay and Kenai Fjords National Parks). In 1989, Prince William Sound on the south coast was hit by an environmental disaster when supertanker Exxon Valdez grounded and leaked 50,000 m 3 of oil.

Native Americans are thought to have migrated along a land link across the Bering Strait at least 15,000 years ago, while Inuit and Aleutians immigrated later.

In 1728 and 1741, Russian expeditions led by the Dane Vitus Bering explored the waters off Alaska. Russian fur traders established a settlement on Kodiak Island in 1784, and from 1799 Alaska was subject to a Russian trade monopoly under the imperially privileged Russian-American Fur Company. The company established a large trade in fur – mainly sea otter fur. It pursued an aggressive policy towards the indigenous peoples and perpetuated massacres of Indians and Inuit in 1802.

The Russian settlement comprised only a few hundred residents and was not an actual colonization. In the early 1800’s, conflicts arose between Russian, British, and American fur traders, just as the British Hudson’s Bay Company, which administered large parts of Canada, wanted to expand its holdings with southeastern Alaska. Russia guaranteed in 1824 all fur traders equal trading rights, and the border with Canada, which follows 141 v.lgd., Was established in 1825. Due to. a drastic decline in the sea otter population and economic problems after the Crimean War (1853-1856), Russia wanted to divest the area from 1859, and the United States could therefore in 1867 acquire the whole of Alaska for 7.2 million dollars.

In 1861, the first gold finds were made in Alaska, and major finds in the 1890’s – including in the Klondike in 1896 – accelerated American settlement. The findings gave rise to controversy over the demarcation of the border with Canada, but in 1903 agreement was reached on the border at the Alaska Panhandle, and in 1912 Alaska was granted territory status.

During World War II, Japanese attacks on the Aleutians in 1942 led to the construction of several large air bases, and during the Cold War, Alaska, by virtue of its geographical location, was of great military strategic importance. 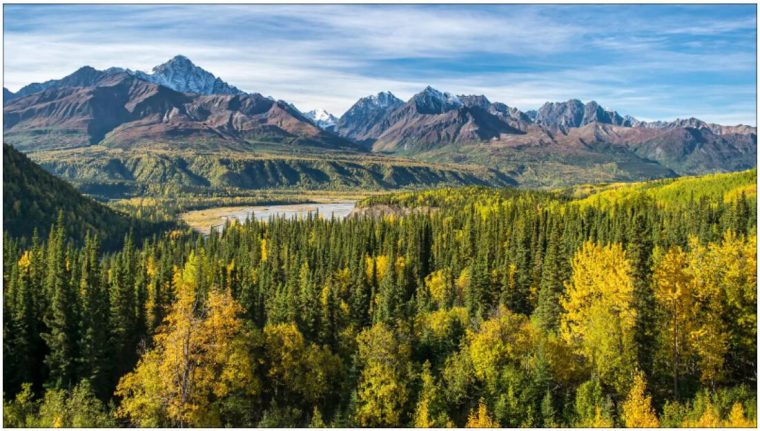