Most Nicaraguan people are Catholics. The Catholic Church has a strong position and its political influence has increased since the parliament voted in 2006 for a total ban on abortion.

Both the Pentecostal church and the Baptist community have been operating in the country since the 1920s. Since the 1990s, the number of Protestant Free Churches has increased substantially, especially in poor areas. On the Atlantic coast, the Protestant Moravian church dominates after a revival movement in the 19th century. 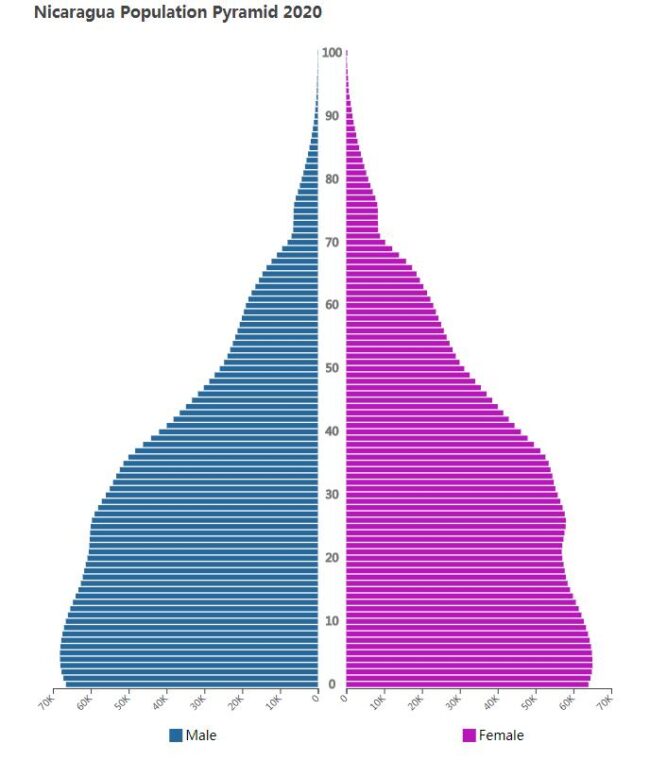 The population is very unevenly distributed and lives mainly in cities. With their fertile volcanic soils, the coastal plain on the Pacific and the Nicaraguan Depression around the great lakes are the main settlement areas. Two thirds of all Nicaraguans live here, while the eastern lowlands are only very sparsely populated.

The Ministry of the Interior releases 91 political prisoners under a special program for “family coexistence”, and places them under house arrest. Vice President Rosario Murillo says the release aims to contribute to reconciliation following the unrest that erupted in 2018. Among those released are people arrested in November in connection with trying to help hunger-stricken mothers into political prisoners. According to the Opposition Citizens’ Alliance, some 60 political prisoners remain in prison.

The Conservative Party (PC) decides to withdraw its only member of the National Assembly because the Assembly is currently “undemocratic” and “discriminatory,” according to party leader Alfredo César. The PC thus opens the opportunity to join the opposition alliance that the protest movement in the country recently said it plans to form for the 2021 election.

US sanctions against presidential son

US faces sanctions on President Daniel Ortega’s son Rafael Ortega Murillo, on charges of corruption and money laundering. According to US Secretary of Commerce Steven Mnuchin, Rafael Ortega plays a leading role in the president’s economic “irregularities”. The United States has already previously imposed sanctions on the president, his wife (see November 2018) and another son, Laureano Ortega Murillo.

EU Secretary of State Federica Mogherini strongly criticizes Daniel Ortega’s government since security forces struck a ring around a church where eleven women hunger strikes and arrested people who tried to support them. The women of the Masaya Church have been starving for a week, demanding that political prisoners be released. They are cut off from their followers outside the church and have no access to water or electricity. Sixteen government opponents have been arrested in connection with trying to get inside the church with water, and are accused of weapons possession and “terrorist acts”. The harsh clashes in Masaya have also caused criticism from the UN. Earlier this week, nine people began a sympathy hunger strike at the Cathedral in Managua, but were attacked by supporters of Ortega and had to be evacuated from the Cathedral under the protection of the Red Cross. A priest and a nun were injured in the incident. Mogherini suggests that the EU sanctions framework may be activated (seeOctober 2019).

The EU is facing sanctions

The EU adopts a framework for sanctions against Nicaragua, due to oppression and human rights violations. The framework does not lead to immediate action but means that travel bans and frozen assets can be introduced quickly. The EU’s foreign ministers write in a statement that the government’s refusal to resume dialogue with the opposition indicates a lack of will to find a “peaceful and democratic way out of the crisis”.

The daily newspaper Nuevo Diario comes out with its last issue. The newspaper, which has been critical of President Daniel Ortega’s government, states that the repression makes it impossible to continue. The magazine refers to “financial, technical and logistical difficulties” that make it unsustainable to keep going. According to the newspaper, the authorities have been blocking the import of newsprint for almost a year. Nicaragua’s other major independent newspaper, La Prensa, has similar problems.

Archbishop Waldemar Stanislaw Summer Day confirms that the government has interrupted the dialogue with the opposition alliance ACJD. That would be the case when President Ortega already hinted at the 40th anniversary of the revolution on July 19, and Foreign Minister Denis Moncada is said to have announced it to the Vatican on July 30. The government blamed ACJD for canceling its participation in the dialogue at the end of May. The alliance has demanded electoral reforms and that the elections in 2021 should be made premature. The government now intends to conduct an electoral reform on its own and only debate with the political opposition represented in the National Assembly. There, the ruling FSLN has an overwhelming majority as most of the opposition boycotted the latest election.

More than 100 people arrested in connection with the unrest are released from prison in two rounds for two days. As a result, a total of nearly 500 people have been detained since prisoners began being transferred to house arrest in February, while around 80 have still not been released.

Parliament approves an amnesty for “all” participants – both protesters and police – in the unrest that broke out in April 2018. The government has promised to release all those arrested by June 18, provided they “refrain” from continued protests. FSLN’s ruling party leader in Parliament, Edwin Castro, regrets that “police killers” are acquitted but says “the country goes first”. The Opposition Alliance Unab is a critical amnesty law because it includes crimes committed by security forces, militia groups and other government representatives.

Opposition supporters gather for a protest march ahead of the anniversary of the demonstration that triggered the riot against President Ortega, April 18, 2018. Protest participants defy the ban on demonstrations introduced in September. They are met by riot police and prevented from reaching the center of Managua, and about 70 protesters are arrested. The protest is organized by an opposition alliance which calls itself National unity blue and white (Unidad nacional azul y blanco, Unab) aimed at the country’s flag.

The Catholic Church decides to move Bishop Silvio Báez to the Vatican for security reasons. The 60-year-old bishop is an outspoken government critic and has been subjected to repeated death threats. He and several other Catholic leaders suffered a physical attack when the faithful militia broke into a church in the summer of 2018.

The government promises to restore rights

The government is said to have promised to restore the right of demonstration and freedom of the press, as well as to dissolve the paramilitary groups that have been active during the unrest. Furthermore, non-profit organizations that have been dissolved should be given the right to re-organize themselves. The settlement is the first to be reached during the talks with the opposition that started a month ago.

Prisoners should be released

The government agrees to release all the around 700 who were arrested after the protests within three months, says mediators in talks with the opposition. One condition is that the parties jointly call on the United States and the EU to lift the sanctions imposed because of the harsh measures taken on protesters since the protests erupted in April 2018. The government and the opposition have agreed a six-point negotiation process and are asking for international support to implement the agreements entered into. The Red Cross should monitor the process when the arrests are released.

The opposition sets up calls

The opposition alliance ACJD decides not to participate in talks with the government in protest against “violence and repression” against protesters. The message comes two days after the riot police used tear gas and temporarily arrested more than 100 people, in connection with a demonstration demanding the release of political prisoners. It was the first major demonstration in four months in Nicaragua, where all protests were banned (see September 2018).

Another 50 people arrested in connection with the protests against the government in 2018 may leave a high-security prison outside Managua and be sent to house arrest. This has been done since the opposition demanded that political prisoners be released to continue talks with the government, which started at the end of February but which has essentially stopped. The opposition has also demanded earlier elections, something that President Ortega has completely rejected.

Government representatives and opposition members meet during mediation by the Catholic Church, in an effort to resolve the now ten-month-old political crisis in the country. However, the government has refused to allow the OAS to participate in what is called the national dialogue. Previous conversations under the auspices of the Catholic Church were stranded in June 2018, when President Ortega refused to meet demands for him to step down. Around 100 people who have been imprisoned after participating in the demonstrations are transferred to house arrest prior to the calls. Several hundred others are still in prison.

Two peasant leaders are sentenced to 216 and 210 years in prison respectively for participating in the protests against the government in 2018. Medardo Mairena and Pedro Mena are both convicted of terrorism and other crimes. They were both arrested in July 2018 and charged with participating in a protest action that resulted in the deaths of four police officers and one civilian. Mairena is one of the founders of the opposition group Citizens Alliance for Justice and Democracy (ACJD). The actual maximum time in prison in Nicaragua is 30 years.

One of Nicaragua’s most famous journalists, Carlos Fernando Chamorro, states that he has fled Costa Rica. The message comes a few weeks after a raid against his newspaper El Confidential (see December 2018). Chamorro, who is the son of former president Violeta Chamorro, says the threats against him have increased since then. The newspaper La Prensa has a few days previously had an almost empty front page, with the text “Can you imagine living without information?” According to La Prensa, media organizations have been quietly silenced in Nicaragua since the wave of protests began in April 2018. The EU has now warned that sanctions may be on the country.