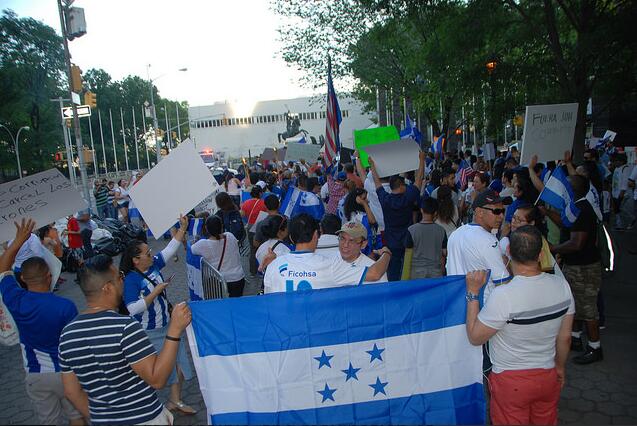 The current conflicts in Honduras revolve around access to land and resources as well as environmental degradation. There are currently conflicts in all parts of the country in the course of major projects in the economic sectors: mining, renewable energies, agribusiness, infrastructure and tourism. Most of the concessions were awarded in these sectors. Around 30% of the Honduran territory is licensed.

The causes of the conflicts are complex. One of the main causes, however, is non-compliance with ILO Convention 169 for the protection of indigenous rights. Although Honduras ratified this in 1995, it is not being complied with and is to be regulated by a national consultation law in 2018. Indigenous associations fear that the so-called Ley de Consulta will overturn the convention. Non-indigenous communities are also excluded from the FPIC (Free, Prior and Informed Consent).

In addition, the 2018 Criminal Code reform criminalized people who advocate equitable access to resources and defend their country. Temporary land occupation – a common form of protest – is equated with criminal offenses such as drug trafficking, robbery or kidnapping, among others. The UN Working Group on Business and Human Rights sees the causes of the conflicts in the lack of transparency in the implementation of large-scale projects and the insufficient opportunities for the population to participate in their planning.

Despite these acute dangers, people are protesting in almost all parts of the country who are threatened by displacement and environmental pollution due to economic projects.

Land wars: So far, no government in Honduras has succeeded in carrying out a far-reaching agrarian reform and thus effectively fighting the land ownership problem and the associated poverty. Property inequality is particularly high in the agricultural sector. More than half of the farmland is owned by only 3.7% of the farmers. There are around 300,000 landless people. Land titles that have not been awarded, have been awarded twice or are not recognized represent a problem for the landless, indigenous and rural communities, as they are thus denied equal access to land. The big landowners have always succeeded in preventing or reversing land reforms, as in 1992 with the law on the modernization of the agricultural sector. There was also no fundamental land reform in Zelaya’s reign, but under him Decree 18-2008 was passed, which would have enabled land redistribution. The decree was abolished under the Lobo government. Access to land is essential for smallholders, and effective land reform would create food security for thousands of people. However, the current economic policy relies on the exploitation of natural resources and not on an agricultural policy that relies on the rural population.

The agricultural conflict has existed for years with varying degrees of intensity. Since the coup in 2009, various land conflicts have come to a head, particularly in the regions of Bajo Aguán (Dept. Colón), Zacate Grande (Dept. Valle) and on indigenous territories. The conflicts in the Bajo Aguán and Zacate Grande concern, among other things, the violent land grabbing by the DINANT company for oil palm plantations. The conflict in Bajo Aguán has intensified dramatically since the coup and has claimed more than 150 lives in the past 10 years. The violent climate, human rights violations and the presence of the military have an impact on the entire population. Farmers fighting for land are being criminalized. In the course of the protests against the government, several cooperatives have occupied landless people, land owned by private individuals and companies that are actually reform countries. There are always violent evictions.

According to computerannals, the government of Honduras is trying to solve the current food crisis – triggered by the Covid-19 pandemic – by means of a special decree. Decree PCM 30-2020 allows collective common and state land to be given to agribusiness companies to produce food. Due to different institutional responsibilities (the decree is implemented by the SAG Ministry of Agriculture, but the National Agricultural Institute is responsible for collective land titles) and the general agricultural policy that supports the agro-industry, farmers’ organizations fear that this will result in them losing their land in the long term. The Organsiation CESPAD has here a good analysis of it.

Access to natural resources: In addition to access to land, the defense and protection of the habitat for rural and indigenous communities are essential for their existence. These communities are constantly threatened by various economic projects. The National University (UNAH), OXFAM and the FOSDEH organization have developed an Internet portal (see above) with an overview of the territories threatened by extractivism. Approximately 20% of the concessions for mining and energy projects are in (afro) indigenous areas. In the course of the dangers of land loss and environmental pollution from mining and hydropower plants, 70 counties have so far decided in citizens’ assemblies that their respective district should be free of mining and hydropower plants. The implementation of the citizen’s vote is quite different in the individual districts.

In the south of Honduras, communities are affected by renewable energy projects and the planned model cities. In Namasigüe County, for example, people are protesting against photovoltaic systems in their communities.

Mining has threatened a number of communities across the country. The municipality of Guapinol is an example of this. A mining project by the Honduran company Inversiones Los Pinales within a nature reserve caused devastating water pollution in the river, which supplied 14 neighboring communities with drinking water. The communities fought back with a protest camp. From August to the end of October 2018, residents protested against the pollution, then the camp was cleared by the military. 31 environmental activists were criminalized, 12 of them arrested for land occupation. A success for the communities: the charges were dropped in March 2019. Charges against other activists still exist; eight of the 31 environmental activists are currently in Pretrial detention and charges should be brought against them. As long as concessions are not withdrawn, the communities’ living space is threatened.

Some current conflicts and the human rights situation in the affected communities are presented in a report from various organizations (including Aci-Participa, Peace Watch Switzerland, C-Libre).

In its report published in January 2017, the non-governmental organization Global Witness found that with 123 murders (since 2010) of environmental activists, Honduras is the most dangerous country for people who defend their land and nature. It would be all the more important if Honduras were to sign the Escazú Agreement. This Latin American agreement is intended to ensure more transparency in environmental agreements.

One of the murdered environmental activists was the coordinator of the indigenous Lenca organization COPINH, Berta Cáceres, who was killed on the night of March 2-3, 2016. The murder is related to their tireless fight against the dam project Agua Zarca by the Honduran operating company DESA. The Lenca community Río Blanco, Dept. Santa Barbara and Intibucá, protested against the planned hydropower plant Agua Zarca (Dept. Santa Barbara and Intibucá). Intíbucá from 2013 to 2017. After the murder of Cáceres, the project was suspended, but the concession was not withdrawn.

The murder of the internationally known coordinator of COPINH, winner of the Shalom Prize and the Goldman Prize for environmental activists, caused consternation worldwide. There have been nine arrests so far. The investigation was not transparent. At the request of the Cáceres family, the Grupo Asesor Internacional de Personas Expertas (GAIPE) was set up to carry out an independent analysis of the case. Her report, published at the end of October 2017, shows connections up to the highest level and is well received in the international press. The negotiations against those arrested so far were intransparent and slow. More than a year after seven of the eight defendants were found guilty, the sentence was announced in December 2019. They were sentenced to 30 to 50 years’ imprisonment. A report by various US human rights organizations published in September 2019 shows the network of corruption and violence in the energy industry using the example of former DESA managing director David Castillo, who was arrested last year.