Religious freedom prevails in Guatemala but the Catholic Church has a special position according to the constitution. However, other Christian communities have grown in recent years and Protestants are now almost as many as Catholics.

Protestantism has a strong historical position, since a number of political leaders have been Protestants ever since the end of the 19th century. In recent decades, evangelical missionaries, mainly from the United States, have also had great successes.

There are clear elements of Mayan mysticism in the faith practice of many Christian Guatemalans. A small proportion of indigenous peoples practice more traditional religion.

Foremost in Guatemala City are also small groups of Jews and Muslims. 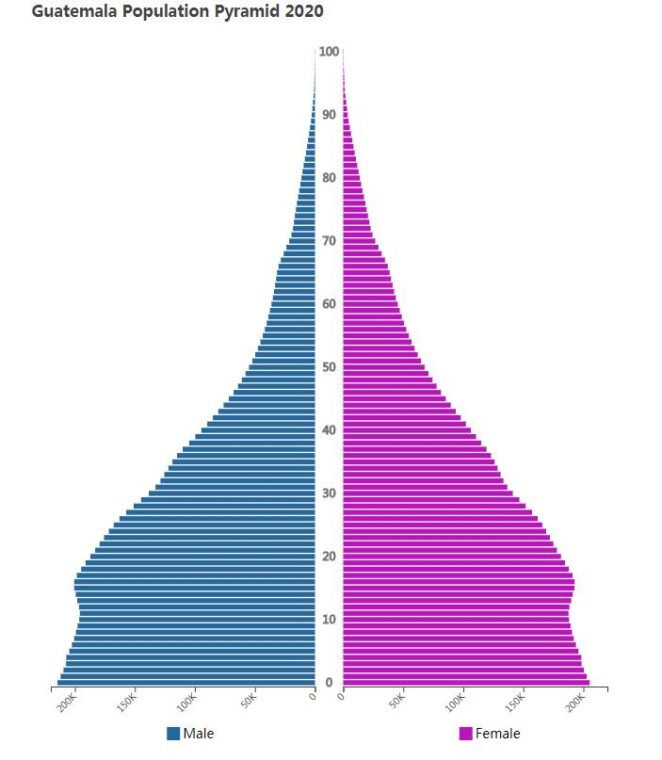 A former soldier is sentenced to prison for the 1982 massacre at Dos Erres (see also March 2012). The man is sentenced to 30 years imprisonment for each of 201 people’s murders to over 5,000 years in prison, even though under Guatemalan law he cannot sit for more than 50 years. The man was arrested in the US in 2016 and extradited to Guatemala.

Former Vice President Roxana Baldetti is sentenced to 15.5 years in prison for embezzling millions of dollars set aside to purify a poisoned lake. The chemicals used for purification were found to contain most water, salt and chlorine, which is why the deal has come to be called the “magic water scandal”. Another nine people are sentenced to between 3 and 15 years in prison. Roxana Baldetti is also suspected in three other corruption cases, including “la línea” (see August 2015).

Former military intelligence chief Mauricio Rodríguez Sánchez is set free from suspicions of genocide and crimes against humanity (see also May 2013). Two out of three judges believe that Rodríguez Sánchez only obeyed orders when the abuses in question happened in 1982. The third judge wants to convict him. The target is the same as for the dictator Efraín Ríos Montt, who died in April 2018.

The President in attack against Cicig in the UN

President Jimmy Morales is vigorously attacking the UN-backed anti-corruption commission Cicig, in a speech before the UN General Assembly in New York. Morales claims that Cicig has become an instrument of persecution in Guatemala and poses a threat to peace. He also accuses Cicig of violating the country’s constitution by “manipulating justice”. Morales urges UN Secretary-General António Guterres to appoint a new head of Cicig, instead of Iván Velásquez, who the president has banned from entering the country (but which the Guatemalan Migration Agency has said must be allowed).

Corruption fighters are rewarded in Sweden

Former State Prosecutor Thelma Aldana and Cicig Chief Iván Velásquez were awarded this year’s honorary award by the Swedish Right Livelihood Award Foundation, for their fight against corruption and crime in Guatemala. Five other prize winners may share the three million SEK if the so-called alternative Nobel Prize is paid. Thelma Aldana left her post as prosecutor in May and has been living outside Guatemala ever since, for security reasons. Iván Velásquez sits as head of UN-supported Commission Cicig until September 2019, but has been banned by President Jimmy Morales for a few weeks.

The President wants to shut down the UN Commission

President Morales states that the UN-backed anti-corruption commission Cicig will not be renewed (current mandate expires in September 2019). The decision draws criticism from the EU, which says it wants to continue to support efforts for the legal community (see also August 2017 and Political system).

The capital’s airport closes and the president announces three days of country grief following a violent eruption in the Fuego volcano a few miles southwest of Guatemala City. Nearly 200 people are found dead days after the outbreak and at least 200 more are missing. The volcanic eruption is described as the most extensive in over a century. Fuego is one of the most active volcanoes in Latin America. Several outbreaks follow later in the year.

Long penalties for crimes against humanity

Former Army Chief Benedicto Lucas García, brother of ex-President Romeo Lucas García, and three retired officers are sentenced to lengthy prison sentences for the rape and torture of a 21-year-old woman in 1981, as well as for her brother’s disappearance. All four receive 33 years in prison for crimes against humanity for repeated rapes that took place in a barracks. Benedicto Lucas García and two of the others are also sentenced to another 25 years in prison for disappearance. The 14-year-old brother of the rape victim was abducted by soldiers the day after the sister managed to escape from the barracks. He never returned. Benedicto Lucas García and seven others are also suspected of at least 88 massacres of indigenous peoples during the civil war (see January 2016).

Ambassadors of Sweden and Venezuela unwanted

The Government invites Sweden and Venezuela to bring their ambassadors home. Swedish Ambassador Anders Kompass and Venezuelan Elena Salcedo Poleo are accused of interfering in Guatemala’s internal affairs instead of engaging in foreign affairs. They are not formally deported and declared “persona non grata”, but are expected to leave the country. Compass has fallen out of favor by saying that Guatemala is “a corrupt society”. Sweden gives strong support to the UN Commission Cicig. The accusations against Salcedo relate to her having links with an organization that is opposed to the Morale government. Some analysts believe that the attitude towards Venezuela is a way for the Guatemalan government to show support for the United States taking a hard line against the government in Caracas.

Yes to arbitration in border dispute

An overwhelming majority of the voters who participate want the Guatemalan border dispute with Belize to be resolved by the International Court of Justice (ICJ). A full 96 percent vote yes, while 4 percent vote no when the long-delayed referendum is finally implemented (see Foreign Policy and Defense). The turnout is 26 percent. A short time later, Belize decides to hold its own referendum in April 2019.

Former dictator Efraín Ríos Montt dies, 91 years old. Ríos Montt, who was president from 1982 to 1983, was sentenced in 2013 to 80 years in prison for genocide and crimes against humanity (see Modern History and Political System). However, the verdict was torn down and the trial was resumed, but it was never finalized before the dictator died.

Ex-President Álvaro Colom and nine of his ministers, as well as a Deputy Minister, are arrested in an investigation led by Cicig, the UN-backed anti-corruption commission. The suspicions apply to embezzlement and fraud in connection with the purchase of 3,500 buses during Colom’s tenure as president in 2008–2012. According to State Prosecutor Thelma Aldana, only 400 buses have been delivered and only 50 are in traffic. Colom’s successor Otto Pérez Molina is also suspected of corruption (see June 2017). According to Cicig, incumbent President Jimmy Morales should also be investigated for irregularities (August 2017).

Congressman Julio Juárez is arrested by police, suspected of being behind the murder of two journalists in Mazatenango 2015 (see also November 2017). Just a few weeks later, two more journalists are found shot dead in a sugar cane field outside Mazatenango. They were on their way to a carnival when they disappeared. There is nothing to indicate a connection between the murders, other than that the area is known for extensive drug smuggling.