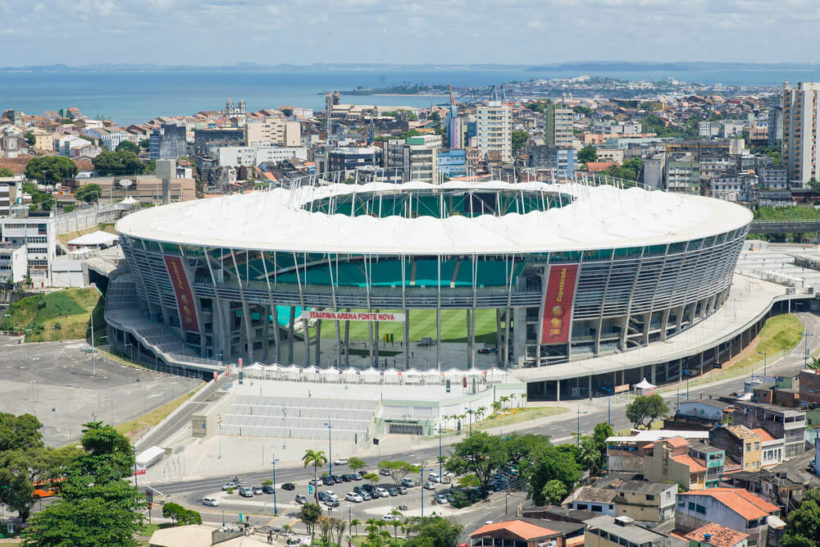 Like most Brazilians, are you a soccer lover? So what do you think about getting to know Fonte Nova Arena  when you go to Salvador? The stadium is among the most modern in the country. In addition, the fans chose him as the  Best Arena of the World Cup in Brazil.

Through the Tour of the Fountain you will be able to know various spaces of the Arena, which includes visit to the locker room, gazebo, cabins, reserve bank, among other environments.

However, while the trip to the capital of Bahia does not happen, we decided to bring you the main points you need to know about the stadium. Interested? So read our post to the end and learn a little more about this amazing soteropolitan tourist spot. Come on?

Although the current structure of the Fonte Nova Arena is quite new, it has played host to a number of thrilling games such as the Confederations Cup (2013) and the Football World Cup (2014). However, for the stadium to occupy its current level, it has come a long way.

It all started in January 1951, with the Otávio Mangabeira Stadium, which was nicknamed Fonte Nova by fans, because of the nearby Tororó Dike. Its capacity was for about thirty thousand people.

Two decades after its creation, it underwent a renovation to build the second floor. Thus, there was a new inauguration on March 4, 1971.

However, that date was marked by a sad event: after shouts that the stadium was crumbling, there was a rush that eventually killed two people and hundreds were injured. On November 25, 2007 a new accident was marked in the life of the fans after the fall of concrete slabs from the stands.

It is noteworthy that these sad stories were in the past, as the entire old stadium was demolished and in 2013 the Fonte Nova Arena was inaugurated. With a much better infrastructure, the space has become a great leisure area for residents and tourists of  Salvador.

Where Fonte Nova Arena is

Located in the central region of the Bahian capital, the Arena is about 27 km away from Salvador International Airport. The sports complex is very close to  the Tororó Dike.  More precisely, it is located in Ladeira da Fonte das Pedras, in the Nazaré neighborhood.

There are several  ways to get to the stadium. If you choose the subway, know that there are two stations that are very close. So you can choose either Campo da Pólvora or Brotas. Another option is to go by bus to Vasco da Gama Avenue or Mário Leal Ferreira and continue walking to Fonte Nova.

In addition, Ladeira dos Galés, located in the Brotas neighborhood, is another way for fans to reach the sports complex.

The nearest bars and restaurants

If you plan to visit the stadium, you should know that you will find some options of  places to eat  nearby. So you need not worry about this detail.

Less than 1 km away, it is possible to find restaurants with prices that fit different budget types. In addition, there is a wide variety of dishes – you can find typical foods from Bahia, Italy, not to mention cafes, ice cream parlors and snack bars.

After its new guise, one of Fonte Nova’s transformations is the possibility of receiving a larger number of fans than the old stadium. It currently  holds fifty thousand people  on average.

In this sense, the sports complex has:

One of the issues that the Fonte Nova Arena kept its attention on was the  accessibility  of people with disabilities and people with limited mobility. So if you or someone in your class has special needs, be aware that you will be welcomed on the stadium grounds.

Altogether there are 500  chairs accessible  for wheelchair users and obese and 500 more for the companions. In addition, the space has elevators, adapted restrooms and access ramps. All this to ensure that no one will be left out of the big events that the complex will host.

Some curiosities about the place

Of course, such a grand stadium is surrounded by countless curiosities, isn’t it? The first of these is his name, which is currently Itaipava Arena Fonte Nova for sponsorship reasons.

Another detail is about its inauguration, which could not have been better. The day featured concerts by renowned artists of Bahian music and soon after there was a great  classic between Bahia and Vitória, the famous Ba-Vi.

During the Football World Cup, the Arena was named as the “Goal Source”. This nickname is due to the amount of goals that were scored during the event. In total there were 24 over the 6 matches played.

Activities that can be done around the stadium

Besides visiting the stadium, you can also enjoy getting to know its surroundings. A place marked by stories and an incredible culture. So here are some activities you might include in your script:

Where to stay in Salvador to watch Arena games

In Salvador there are several lodging options   for all tastes. However, if you plan to go to the capital to watch games at the Fonte Nova Arena, it is best to stay in a  hotel  closer to the central area. This will make it easier for you to get around and spend less on transportation.

In this regard, here are some options we suggest for you:

After discovering so much about the Fonte Nova Arena, even those who are not passionate about football will want to meet it. After all, this place goes far beyond a simple stadium, as it is an environment that supports various types of  entertainment. So when you go to Salvador do not leave this sports complex out of your itinerary. 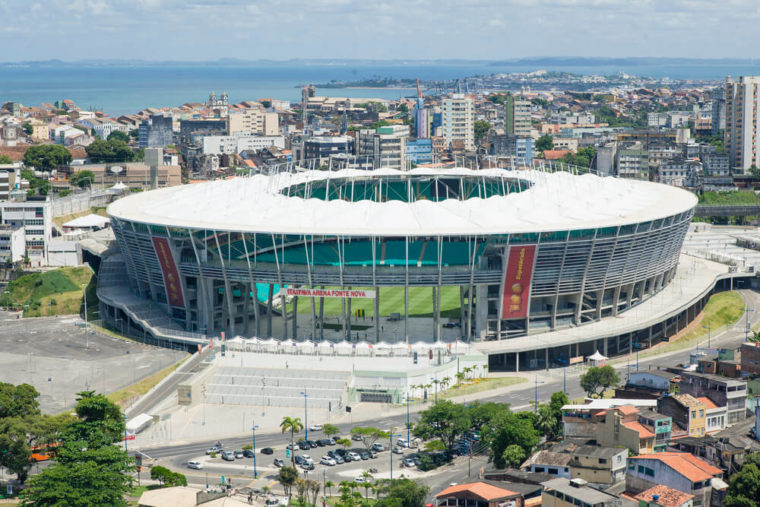