As early as 1904, the Catholic Church was separated from the state of Ecuador, but the church still has influence in society and religion is of great importance to most Ecuadorians.

The Spanish brought with them the Catholic faith and today more than 90 percent of the population profess to do so. The original religions are now practiced only by people in the most remote parts of El Oriente in the east, but in many places the indigenous traditions and rituals have come to be mixed up with Catholic.

As religious freedom prevails, Protestants have long been able to mission in the country, but only in the last few decades have they gained a strong foothold. Protestants have generally been less tolerant than the Catholic Church against ancient traditions. 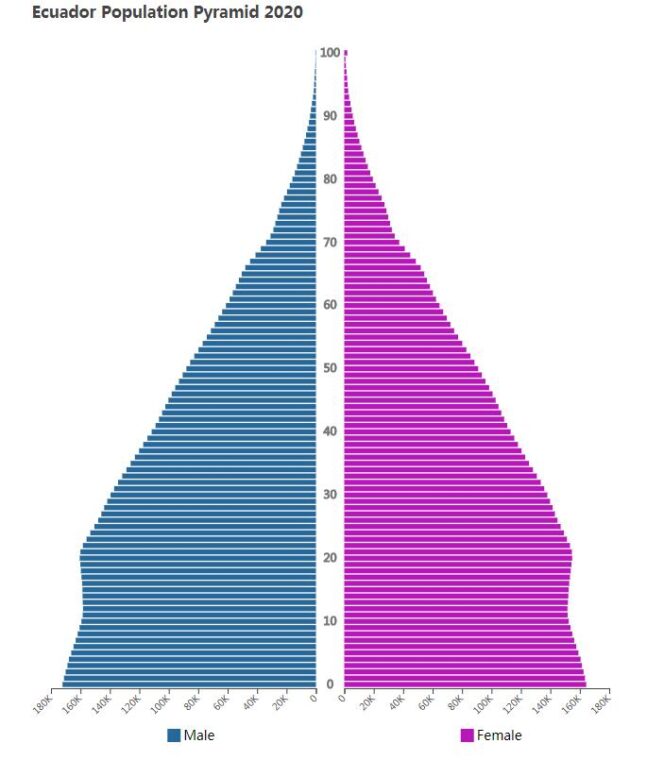 Vice President María Alejandra Vicuña resigns the day after President Lenín Moreno suspended her from office to allow her time to handle allegations that she received bribes when she was a member of the National Assembly five years earlier. The National Assembly has also invited her to resign. Vicuña writes on Twitter that Ecuador does not deserve the “instability” caused by the crisis. The bribery allegations come from a former employee who states that in 2012 and 2013, he deposited a total of $ 20,000 into Vicuña’s account, money that he claims was bribery. She says she is confident that the judiciary will release her from the charges.

Wikileaks founder Julian Assange sues Ecuador for violating his “fundamental freedoms and rights” by restricting his access to mobile telephony and the Internet. Quito accuses Assange of violating an agreement not to interfere with the country’s foreign policy. Ecuador has just given Assange new rules of conduct if he is to have the right to stay at the embassy (see June 2012). This applies both to refraining from interfering with other countries’ policies and to cleaning better and keeping clean after their cat.

The government orders the Venezuelan ambassador to leave the country, in protest of a Venezuelan minister “insulting” President Lenín Moreno by calling him a “liar”. The reason is that Moreno said that 6,000 Venezuelans come to Ecuador daily, because of the crisis in their home country. Shortly thereafter, Ecuador’s chargé d’affaires will be expelled in Caracas.

Ministers from 13 Latin American countries are calling on Venezuela to accept humanitarian aid after a two-day meeting to try to deal with the large wave of refugees from the country. Everyone except Bolivia supports the resolution. According to the UN, 1.6 million Venezuelans have left their country since 2015 in what is described as the most serious refugee crisis in Latin America in modern times. Colombia has received around half of the Venezuelans fleeing the economic collapse in their home country, while Ecuador and Peru are the countries that have subsequently received the most refugees.

The government announces that Ecuador will withdraw from the Alba regional cooperation organization, after nine years of membership.

Ecuador is introducing new rules that mean Venezuelans must have passports and not just ID cards for entry into the country. More than 4,000 Venezuelans have recently arrived on the border with Colombia recently. Many Venezuelans, fleeing the political and humanitarian crisis in their home country, are on their way to Peru or Chile. The new requirements mean that hundreds of people are stuck at the border. Peru has also decided to impose passport requirements for Venezuelans.

A court orders that former President Rafael Correa be arrested because he has not followed a judge’s order to stand in a Quito court (see June 2018). His lawyer says the judge is acting on pressure from President Lenín Moreno, who previously stood close to Correa. Correa has joined the Ecuador Consulate in Belgium, where he lives. However, the judge is not satisfied with this and intends to turn to Interpol to request that he be extradited to Ecuador.

Correa is ordered to appear in court

A Quito court orders former President Rafael Correa to appear every two weeks in court, in connection with the investigation into a kidnapping case in 2012. Correa, who lives in Belgium with his Belgian wife, will order for the first time on July 2. The case concerns an attempt to kidnap a former MP, Fernando Balda, in Colombia’s capital Bogotá in August 2012. The kidnapping was stopped by Colombian police, but Balda, who belongs to the right-wing populist party PSP, was later expelled and sentenced in 2013 to one year in prison for the coup attempt Correa (see September 2010).

President Moreno replaces the Minister of Finance for the second time in two months. Richard Martínez, former head of a business body, succeeds María Elsa Vitieri. Moreno has launched a program of cuts in the state apparatus and increased tariffs, to try to reduce the budget deficit, which in 2017 amounted to about 5.6 percent.

Two journalists and their driver, all employees of the newspaper El Comercio, are confirmed to have been murdered. The three were kidnapped in late March near the border with Colombia. The perpetrators are believed to belong to an outbreak group from the otherwise disbanded Colombian left-wing guerrilla Farc, called the Oliver Sinisterra Front (FOS). Around 1,000 former Farc soldiers are believed to have joined drug leagues instead of laying down weapons. In March, President Moreno stated that 12,000 soldiers and police should be sent to the border region to fight the drug power there.

About 64 percent of voters in a referendum say yes to changing back in the constitution so that a president can only be elected once. Thus, Rafael Correa (President 2007-2017) is prevented from running for election in 2021. A second of a total of seven questions in the referendum also approves a proposal that excludes corruption convicted persons from politics. Furthermore, voters support proposals to limit mining in environmentally protected areas and to reduce the limitation period for sexual offenses against minors.

The ruling party is shattered

Ex-President Correa and 28 members of the National Assembly formally leave the ruling party AP to form a new political movement. It receives the name Citizen Revolution for the time being, but must be renamed for the electoral authority to register the name because it is closely associated with the AP. The resignation means that the government no longer has a majority in the National Assembly but becomes dependent on the opposition to be able to pass legislative proposals.

Authorities confirm information that Julian Assange, founder of media organization Wikileaks, gained Ecuadorian citizenship in December. Ecuador has subsequently requested Assange to be considered a diplomat, but the British authorities have denied this. With diplomatic immunity, Assange could have left the embassy in London where he is still located (see June 2012). The lawsuit in Sweden against Assange has been dropped, but he still fears being extradited to the United States.

The National Assembly votes to appoint María Vicuña as new Vice President after Jorge Glas (see December 2016). Glass automatically lost his title on January 2, when he was absent for three months. Vicuña has been acting vice president since Glas was arrested.

Ex-President Rafael Correa returns to Ecuador (see November 2017) to lead a campaign against a referendum planned by the government on February 4. President Moreno has proposed, among other things, to reintroduce the rule on the re-election of a president (see Political system), which is seen as an attempt to prevent Correa from running for re-election in 2021.