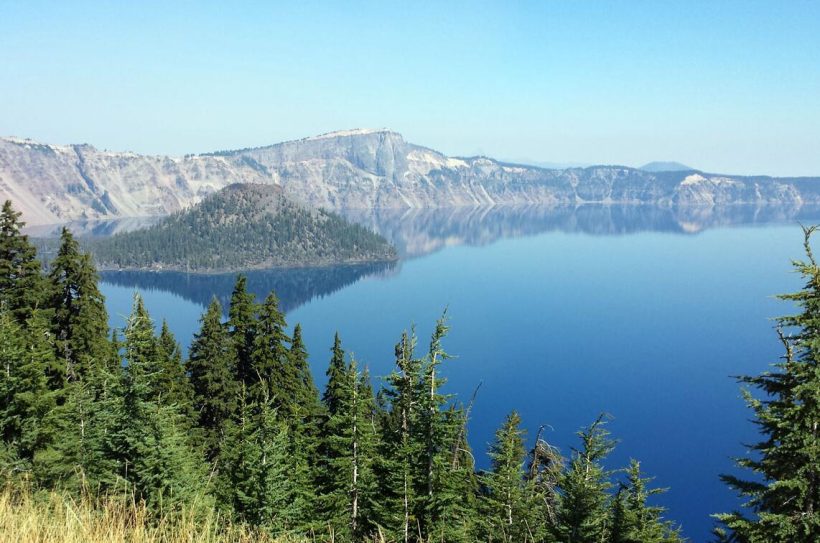 Oregon’s only national park sits on a lake that, at 1,930 feet, is the deepest in the United States and the seventh deepest in the world. The history of Crater Lake began around 7,700 years ago – when Mount Mazama erupted and subsequently collapsed. After this eruption, the Crater Lake basin was formed. The crater rim is 300 meters above the lake. There are wonderful views from the road around the lake, as well as from the 150 km of hiking trails and a lodge.

The highest point is the 2,722 m peak of snow-capped Mount Scott in the east of the park. Around 400,000 years ago, there were numerous active volcanoes throughout the region, which shaped the landscape of what is now the Cascade Range. In 1853 a group of prospectors discovered Crater Lake. As a result, more and more visitors came here. Until 1941 there were no fish in Crater Lake’s clean, clear, cold water. Rainbow trout and kokanee salmon have existed since human introduction.

A picturesque hilly landscape, volcanic peaks and evergreen forests surround the crater lake located in the high Cascade Mountains. The beauty of the national park is difficult to describe – you have to see and discover it yourself. The many hiking trails or boat tours to Wizard Island, the volcanic cone in the middle of the lake, offer visitors the opportunity to do so. Numerous viewpoints are located along the 33-mile Rim Drive. Probably the most used road in the national park is part of a scenic route with an altitude difference of 1200 m. A detour to the Pinnacles is also worthwhile: these 60-90 m high rock formations were formed when the hot ash cooled as a reservoir for the escaping gas, the visible steam outlet channels were later exposed by erosion.

Location and Size
According to allcitycodes, Crater Lake National Park is located in southern Oregon. Covering an area of ​​741 km², Oregon’s only national park includes the caldera of Crater Lake. The highest peak is the 27.22 meter high peak of Mount Scott in the east of the park.

Opening times
The park is open all year round. However, some roads and utilities are closed during the winter.

Rim Visitor Center : Open daily from late May to late September from 9:30am to 5pm. It is closed from October to May.

Entrance fees
USD 25 for cars with max 15 occupants; USD 20 for motorcycles with driver and passenger, USD 12 per person for bicycles and pedestrians – entries are valid for 7 days each.

Accommodation, food, souvenirs
The Crater Lake Lodge with its own restaurant and 71 guest rooms is open from May to October. Motel accommodation is available in Mazama Village from June to October. Snacks and gift items are available at the Rim Village. Caution: the Rim Village is often not accessible in winter due to snow. The shop in Mazama Village offers snacks and groceries.

Camping
Camping is available at the Mazama and Lost Creek campgrounds. Depending on the weather, the campsites are open from early summer and close in October. The Mazama campsite in Mazama Village has 200 pitches, toilets, showers, washing machines, a shop and a rubbish dump. Lost Creek Campground is located 3 miles off Rim Drive on the road leading to the Pinnacles. It has 16 pitches for tents, water and toilets. Backcountry camping is also permitted with a free permit, available from the visitor center.

Petrol
Unleaded petrol is available next to the campsite shop in Mazama Village from June to October. Gasoline is not available in the park the rest of the year.

Climate
Summer: Summer weather is predictable with warm, dry days, blue skies and cool nights. Visitors to Crater Lake National Park should be prepared for any type of weather year-round. In May and June the highs are around 18°C ​​and the lows are close to freezing. The best weather is from July to September – with temperatures between 4°C and 27°C. It cools down quickly at night, with average temperatures around freezing point down to 4°C. Summer thunderstorms are possible.

Winter: Crater Lake is one of the snowiest areas in the American Northwest. The first snow usually falls in October and remains until the following June. On average, 1,350 cm of snow falls in winter, and up to 4 m of snow is very common.

Clothing
Visitors to Crater Lake should bring an outdoor jacket in summer and warm waterproof clothing in winter; Sunscreen and sunglasses are always recommended!

Viewpoints
Highway 62 and the south entrance road lead to a year-round viewpoint of the lake. All other roads in the park are closed during the long winter.
The north access road normally opens in mid-June, with Rim Drive fully open in July, weather permitting. The Rim Drive is a 53km road that circles the crater lake to the main viewpoints. A 7-mile (11 km) side road stretches from Rim Drive to the Pinnacles, volcanic rock obelisks.

Boat trips
From the beginning of July to mid-September you can take boat trips, which are offered by an operator and the national park administration. The 1 3/4 hour boat ride circles the inside of the caldera, passing Wizard Island where the stop is made and the Phantom Ship, a lava rock jutting out of the crater lake on the south side.

Park Ranger-Led Activities
During the summer, park rangers offer guided hikes, lectures, and special children’s programs. Campfires are held in the evening at the Mazama campsite. 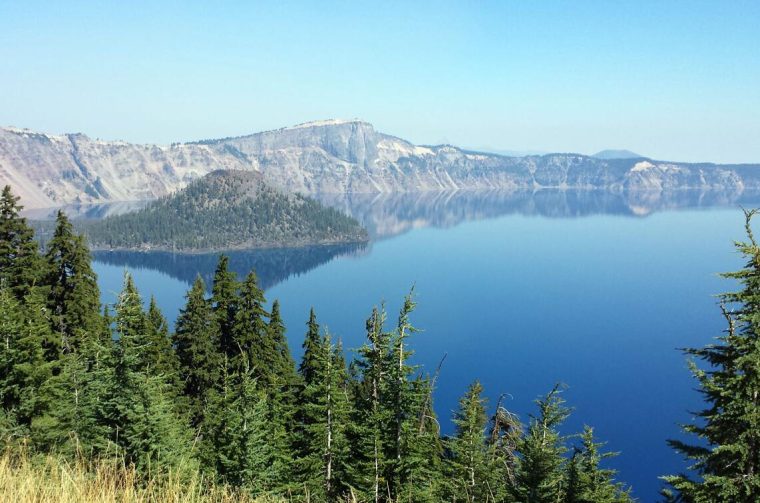