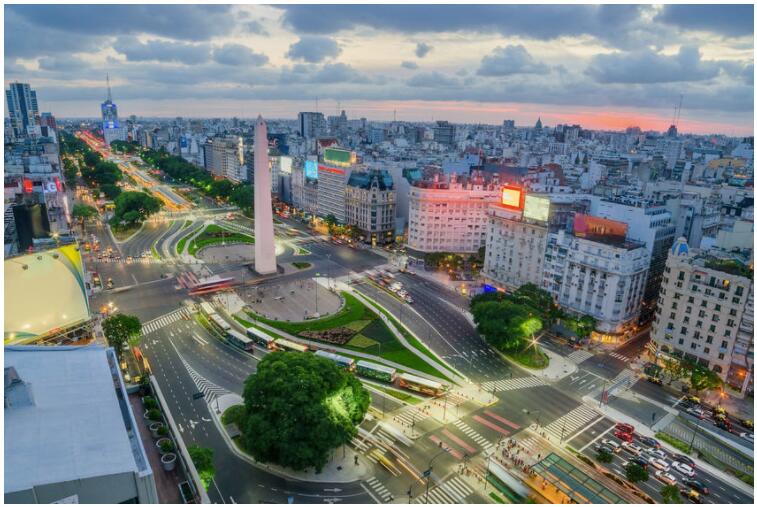 Buenos Aires is perfect for both those who are interested in culture and those who just want to enjoy a few days in a real big city. There are art museums, galleries, theater and other cultural installations throughout the city, and there is also no shortage of cafes and restaurants that serve good and cheap food all day long. Although it is a fairly large city, most of the shopping, attractions and cultural installations are located within the city center, and you can mostly go to most things you need.

Despite the fact that Buenos Aires is located on the other side of the world, there are many elements in the city that are similar to similar elements in European cities, and one of the most striking similarities is the architecture. The city has a large proportion of descendants of European descent, and these have left their mark on the city by including architectural styles from their home country. You see especially many buildings with a style that is inspired by Italy.

Argentina has also borrowed food traditions from the rest of the world, and you get most of what you expect at the restaurants there. The country specializes in steak and grilling, so if you like big and juicy pieces of meat then you are in the right place!

Many people use Buenos Aires as a base when traveling abroad in South America, but there is nothing stopping them from traveling to Buenos Aires to stay primarily in the city. You are guaranteed not to get bored even if you plan one week in the city, because as mentioned, the city has taken inspiration from all over the world, so it should be well done to get bored. Otherwise, the city is centrally located in South America, and there are both planes and buses to the rest of the continent.

When planning a trip to Buenos Aires, it is important to remember that the seasons are about the opposite as here in Norway. This means that it is at its hottest in the summer, so do not forget to check up on the expected temperature at the time you leave. It can get incredibly hot in the summer there, so many people prefer to travel when it is spring or autumn.

Of course, it is not so cheap to travel to Buenos Aires, and flights there can cost a lot. There are no Norwegian airlines that fly directly to the city, and the easiest and fastest way to get there is by stopping in either London or Paris. The actual flight including the stopover takes about 20 hours, so be prepared for long travel times. You land at Ministro Pistarini, an international airport just 45 minutes from the city center.

Although it is expensive to get to Buenos Aires, it is a fairly cheap city once you arrive. In Buenos Aires and the rest of Argentina, you can live well even on a small budget, even though it is one of the most expensive cities in South America. The economy in Argentina, on the other hand, is very volatile and characterized by high inflation, so there may be major changes in price levels in a short time.

There are good shopping opportunities, and the main shopping street is called Florida. Along this street there are larger shops aimed at tourists, but you will find small, authentic shops when using the side streets from Florida. Many people believe that Buenos Aires is one of the best shopping cities in all of South America, and most people find everything they hope for here.