Religious freedom prevails and the state is now separated from the church. A large majority of the population confess to the Roman Catholic Church, but Protestantism is on the rise. It is common with elements of traditional beliefs in the practice of religion.

As of the 2009 constitution, the state and church were separated, but the Catholic church, which was previously a state church, in practice still has a special position. For example, the government encourages the church’s social projects, as they reach large sections of the population. Some public schools offer voluntary Catholic religious education but do not have a similar offer for students of other faiths. 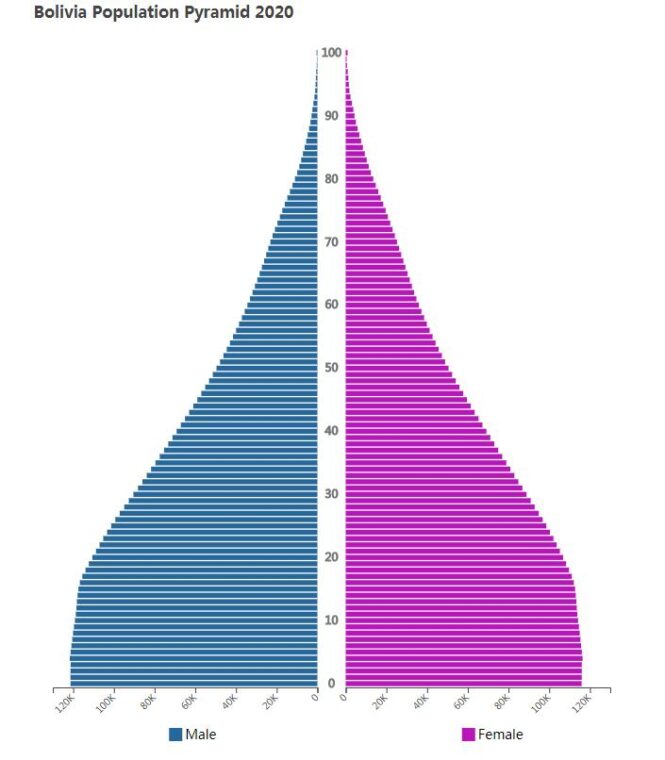 Among the indigenous people, Catholicism is often strongly mixed with traditional religion. In it is praised Pachamama (Mother Earth on quechua), the goddess of fertility, identified with the Virgin Mary. The god of prosperity and prosperity Ekeko also plays an important role in religious life (see Customs and customs).

The Protestant communities welcomed the 2009 Constitution, which was intended to make the state neutral on issues of faith and religion. But they later accused the government of replacing Catholicism with a preference for original religion.

Protestants have opposed a new law from 2013 that requires all churches and communities to be registered with the authorities and be active within the framework of “the good life”, a concept taken from the world view of Ayama. Evo Morales, who was President of 2006-2009, identifies himself ethnically as Aymara but religiously as “grassroots Catholic”.

In a 2014 Pew Research Center report, 77 percent of Bolivians identified themselves as Catholics and 16 percent as Protestants. In addition, there are smaller groups that follow traditional religions, belong to other Christian communities, are atheists, etc.

The Supreme Electoral Court (TSE) gives the go-ahead for President Evo Morales to stand in the 2019 election (see November 2017). The Court approves nine candidates for primary elections to be held at the end of January, including Morales. According to the opposition, it is contrary to the constitution if Morales resigns, while he himself claims that it is a human right for him to participate. The election court’s message is followed by street protests a few days later.

Setback in court for Bolivia

The International Court of Justice (ICJ) rejects Bolivia’s demand for a land corridor through Chile to the Pacific (see Foreign Policy and Defense). The ICJ states that Chile has no obligation to give Bolivia access to the sea. The ruling that comes after five years of deliberation is final and cannot be appealed. Nevertheless, President Evo Morales said in a comment Bolivia never gives up on the issue.

Two former presidents, Carlos Mesa (2003-2005) and Jorge Quiroga (2001-2002), are pardoned by President Evo Morales but immediately rebuffs the gesture, claiming they are innocent of what they are accused of. Mesa risks being brought to trial for decrees he issued that affected a Chilean mining company – and by extension, the World Bank ordered Bolivia to pay damages. Quiroga is accused of having signed an agreement with oil companies without Parliament’s approval. President Morale’s play is believed to be an attempt to increase government support before the decision on the dispute with Chile is expected from the International Court of Justice in The Hague on October 1.

General health insurance must be introduced

President Morales announces that general health insurance will be introduced from 2019 and give all Bolivians access to free health care.

Legal process in the United States against ex-president

A US judge cancels a conviction against former President Gonzalo Sánchez de Lozada and his Secretary of Defense Carlos Sánchez, who were ordered to pay $ 10 million in damages. A jury had found in April that the two had legal responsibility for civilian deaths in connection with riots in October 2003 (see Modern History). The trial is conducted under a law that allows civil litigation in the United States to be conducted for extra-judicial killing in other countries. Eight families have sued the former president and former defense minister, both of whom have been living in the United States since 2003. The lawyers of the relatives intend to push the process forward.

Seven prisoners are killed when 2,000 police storm a Santa Cruz jail following a riot. The inmates had taken control and “total lawlessness” prevailed according to police after protests against deteriorating conditions. The prison holds over 5,200 people but only a few hundred of them have received their sentences, the rest are awaiting trial.