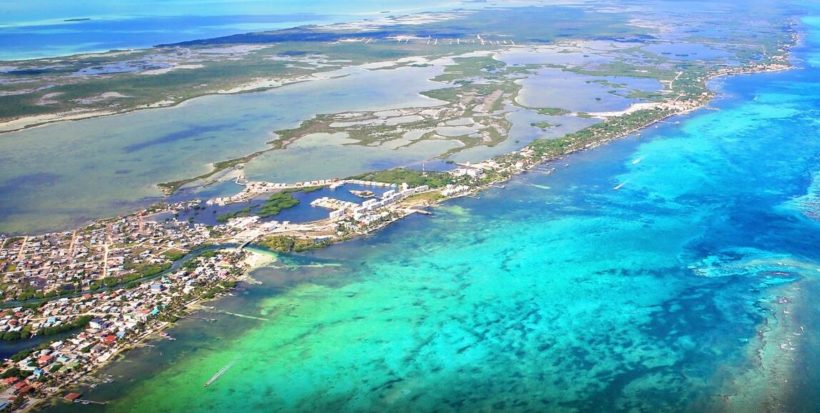 Belize is a constitutional monarchy in Central America, on the Yucatán Peninsula on the Caribbean. The country borders Mexico in the north and northwest, and in Guatemala in the west and south. Belize is a developing country prone to hurricanes and floods. It was called British Honduras until 1973.

Belize is the only country in Central America that has English as the official language. Culturally and historically, Belize is part of the Caribbean. The capital is Belmopan, but Belize City is the largest city.

Belize (the name) has unclear origins, but is probably an ancient Mayan Indian name on the river Belize, “sea water”.

National anthem is “Land of the Free”. 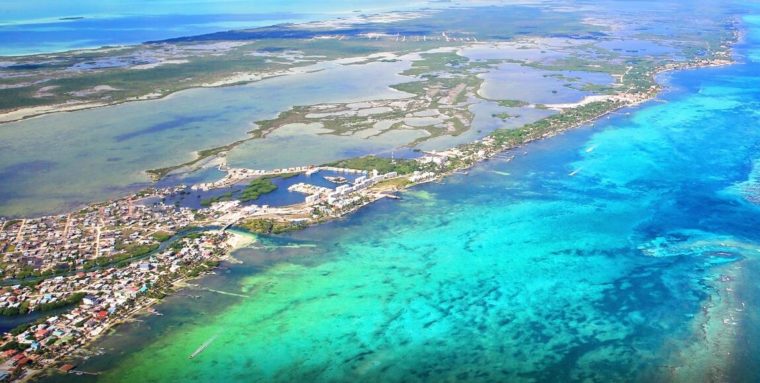 Belize is roughly rectangular in shape and measures approximately 280 kilometers north-south and about 100 kilometers at the widest east-west. The country’s northern and coastal area is low and swampy. Many places have dense rainforests. Ambergris Caye is the largest island.

Off the coast there are a number of coral islands and the Belize Barrier Reef, which is part of the Mesoamerican Reef System and the world’s second largest barrier reef. To the south lies the low Mayan mountains with Doyle’s Delight, 1124 meters above sea level, as the highest point in the country. Belize lies between the rivers Hondo and Sastoon; The river Belize flows through the middle of the country.

The climate is tropical and very hot and humid. The average temperature in Belize City is 28 ° C in August – September and 24 ° C in December. The annual rainfall varies between 4600 millimeters in the south and 1350 millimeters in the north. In the southern highlands it is cooler all year round. Especially the coast is often haunted by devastating hurricanes.

More than 60 per cent of the area is wooded. In the north there are deciduous forests with species such as mahogany, ironwood and sapote. In the south there are higher forests mainly with oak, pine and West Indian cedar (cube cedar). There are large swamp forests around the rivers. At the coast there is mangrove vegetation. 36 percent of the land area is protected.

The rich wildlife has species like the jaguar, puma, howler monkeys, half bears, bairdtapir, armadillos, manatee, the American crocodile and many species of turtles and reptiles. The bird life includes parrots, trogons, t ukans, manacins and hummingbirds. Belize Barrier Reef has more than 100 coral species and more than 500 fish species.

Belize is a constitutional monarchy within the Commonwealth of Nations. The head of state is Elizabeth 2, represented by a Governor-General. The National Assembly has two chambers, a Senate with 12 members and a House of Representatives with 31 members. The Prime Minister is appointed by the Director-General and is the leader of the majority in the House of Representatives. There are elections every five years.

The country is divided into 6 districts.

The defense consists of an army, a reserve army and an air wing that includes a special boat unit. Military service is optional for both genders.

The population density is low; the coastal areas are most densely populated. About 23 percent of the population is illiterate. 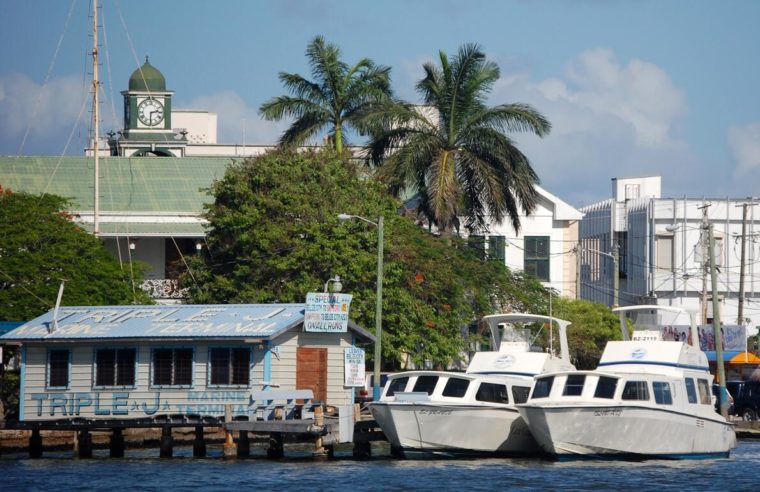 The area that is today’s Belize was covered by Mayan culture. Spaniards explored the coast in 1531 and considered the area unattractive. English and Scottish settlers settled from 1638, engaged in piracy and used slaves from Jamaica to harvest and export timber. Several times the Spaniards tried in vain to force the British out. After many disputes, first with the Spaniards and later with Mexico and Guatemala, the British annexed the area and proclaimed it as the British British Honduras colony in 1862 and as a crown colony in 1871. British Honduras was subordinate to Jamaica until 1884.

The British renounced the responsibility of building a road between Belize City and Guatemala City in 1867. In retrospect, Guatemala repeatedly reiterated road construction requirements and in 1936 proposed that the British relinquish the southern part of British Honduras.

The Crown Colony gained internal autonomy in 1964. In May 1970, the capital was moved to Belmopan. The name British Honduras was abolished in 1973. Under an agreement between Guatemala and the United Kingdom, Belize gained full independence in 1981.

The country has large timber reserves. Most of the timber, which is an important export commodity, floats on rivers for sawmill on the coast. Agriculture employs about 30 per cent of the employed and accounts for almost 90 per cent of export earnings. The main sales products are citrus fruits, sugar and bananas ; cocoa, coconuts and peanuts are also exported. Corn, rice, beans, sweet potatoes and vegetables are grown for their own consumption. Cattle are the most important of livestock. Fishing is driven by lobster,shrimp and sea ​​turtles.

The modest industry is mostly based on the processing of agricultural products and clothing. Some minerals such as dolomite, bauxite, cassiterite and gold are extracted ; only limestone is exported.

Tourism is Belize’s largest industry after agriculture. There is a lot of focus on ecotourism, with an emphasis on diving, fishing, rafting, boating, flora, fauna and Mayan ruins.

Financial contributions from emigrated family members are an important source of income.

There is a compulsory 8-year school for children between 6 and 14 years. Half of them continue in 4-year high school. Then they can choose between 2-year vocational school and 2-year junior college, which gives the right to study. The University of Belize is the only university. About 30 percent of the population over the age of 15 is illiterate.